So it’s perhaps a little odd to have the 8th posting up before I actually finished the 7th one. But that’s the way I roll. Today, continuing on the whole topological theme, I have applied the Toroidal “constraint” to Masyu. That is, lines are allowed to run off the left and come back on the right, and off the top and back on through the bottom. Some might say it’s simply Euclidean space quotiented out by the word ab-1b-1.

Now I say “constraint”, because actually in Masyu having an edge is quite a big thing – so some of the logical deductions you make might seem counter-intuitive.

Bonus points if you can identify the homology class of this loop – using a sensible choice of generators a and b. :) 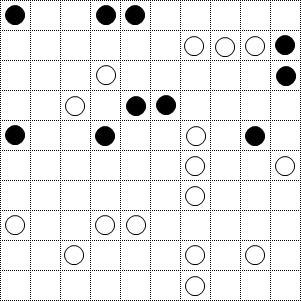 Place holder because I’m late and I’m heading off this weekend and bleh.

Another couple of double-toroidal sudoku coming…

Wow – I’m like totally on schedule. And I’m going to introduce double-toroidal sudoku. Basically it’s sudoku, which lives on a double-torus. Now, the inherent geometry on a double-torus is not Euclidean, but hyperbolic. All that means for those I’ve hopefully confused is that you can’t get a rows and columns arrangement placed on it – which is why this looks a little different. The puzzle is “octagonal” in shape – and just as you glue opposite sides of a square to get a torus, you can glue opposite sides of an octagon to get a double-torus.

So here’s what you need to solve it. There are 6 marked regions with which you want to place the numbers 1-8. There are also 8 “bands” – which start from the centre of each edge of the octagon, and work their way to the opposite edge of the octagon through cells which meet at opposite edges. These are 8 cells long, and again you want to place the numbers 1-8 in each. Basically, it’s exactly the same idea as Penrose sudoku

Finally, there are 2 bands around the perimeter of the octagon, each 16 cells long. (Can you see them?) Any consecutive 8 cells in these two bands again contain the digits 1-8. All of these constraints together are actually very strong – so a lot of the clues below are unnecessary. However I made the puzzle easier so that you can figure out some of the nuances of the puzzle’s geometry in time for a monster next week. :) 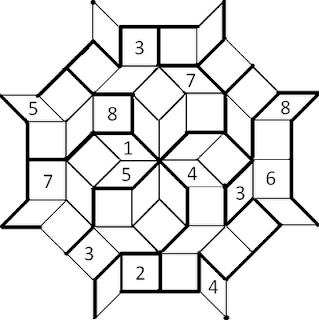 Back after a gap of too long I know, but here are two nurikabe puzzles. If you’ve forgotten the rules, I refer you back here. 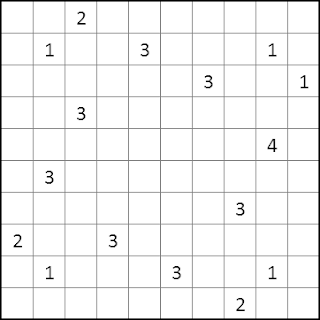 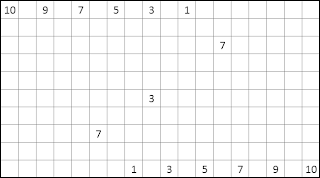