Ok, so here’s part one of my mini-crusade to provide a more enjoyable alternative to those who can’t have a go at the UK WSC qualifiers. And indeed to those who have done or will do them. Puzzler have bastardised the name of diagonal sudoku, and instead call it “X-Factor”. In my opinion this sounds really quite stupid, but there we go, I’m not a marketeer.

This is the first time I’ve written a sudoku puzzle introducing the diagonal constraint. I think It turned out quite nicely, and should make a good warm-up for the coming harder diagonal puzzle.

Incidentally, the remaining puzzles for this initial section will be a harder diagonal, two classic sudoku puzzles, and a killer. Bearing in mind I think the Puzzler killer generator is actually quite good, I’m going to have my work cut out with that, but those are worries for another time. For now, enjoy! 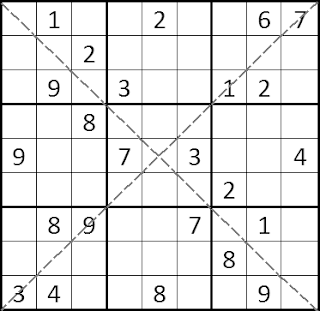 After a little break over Christmas and the new year, I’m pleased to announce that my Friday Puzzles will be returning!

The return has been inspired by two things. The first of which is a sudoku competition, created by Thomas Snyder. There is an awful lot that you could say about Thomas Snyder, but I think the thing that strikes me about him most is that if he doesn’t like something, he may well moan vociferously about it, but he’ll also offer his own take on how things could be fixed. His sudoku cup was, in part, his personal reaction to the fiasco in Zilina.

The second source of inspiration is the upcoming UK WSC qualifier, which I’d like to point my interested British readers to here. I’ve not entered yet; I’ll leave that until the last week as I don’t like waiting for ages and ages to see whether I’ve screwed up or not but in my experience the advertising for it is absolutely piss poor and generally not in the interests of picking the strongest possible UK team.

On the other hand, that’s a criticism I’ve laid at these online qualifiers the past couple of years anyway. Part of that criticism lies at the actual test itself – its collection of vanilla variants still hot from the Puzzler Media generator, coupled with a couple of Vladimir Portugalov’s safer variants, doesn’t really make for the best indicator of the sort of skill set required to excel at WSC on-site solving of more and zestier variants. Especially when the test is online only! There hasn’t been a UK WSC qualifier that hasn’t involved technical hitches either on the part of solvers, or on the part of Puzzler not being sure about cheats yet. Additionally, last year in Zilina, the two people who had qualified by virtue of their test performance were the 5th and 6th best performing of the 6 people representing the UK. Just sayin’.

On a personal note, I’ll add that in most countries where there is an offline national sudoku competition, the winner qualifies for the national team. That sounds pretty reasonable to me…

Anyhow, in response to this, I thought I’d like to improve upon their efforts. As such, in the coming weeks you can expect to see some of the variants you’d see on a UK WSC qualifier – so think a couple of classics, a couple of diagonals, a couple of odd/evens, a couple of killers – and then perhaps a couple Portugalov variants too. These will be better both in quality than the qualifier, and in principle because since there’s nothing at stake, there’s no point in cheating[*]. You (I couldn’t possibly; I’m natural partisan to this argument) might even contend that hypothetically, those who excel at my hand authored puzzles are better prepared for what will be thrown at them in Philadelphia than those who have learned the nuances of the generator.

Anyhow, even if you think all of the above is bollocks, then at least enjoy my puzzles, and I’ll be glad to have helped prepare those who intend to enter the UK qualifier in my own small little way.

[*] This implicitly challenges Puzzler’s assertion that there is no point in cheating simply because “standards are high”.
By Tom Collyer at 17:51 No comments: