Rather excitingly, I passed 10,000 page visits on the blogger platform this week.  I seem to be getting slightly less traffic here compared to Warwick blogs, and markedly less traffic from the UK, which probably makes sense considering all the internal traffic I used to get there.  Still, it'd be nice to see the UK numbers go up, especially with the Times "Su Doku" Championship coming up in September.

For now, I'm going to stick with what I am best at.  Or at least can pull out of the bag with the most ease.  I bet you might even secretly enjoy them, dearest reader, even if you know that if you say so will only provoke me to make more.  Haha... although I'm not sure that'd be possible.  Maybe as an extra challenge, you can work out which clue (I think there is only one) which is superfluous.  Enjoy! 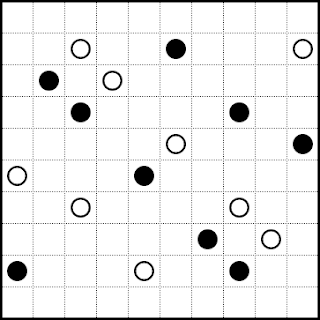 Tom Collyer tries to improve Slalom #1.  Two easyish puzzles, but I think the innovation of shrinking down the posts, thus having more space for the loop to take up as much area as possible in an effort to combat some uniqueness strategies, is a good one.  I'm not sure how elegant it all looks, but perhaps that's more to do with my placing of the gates.  Let me know what you think - and enjoy! 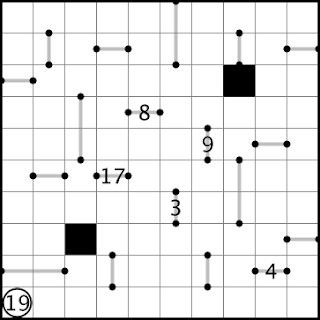 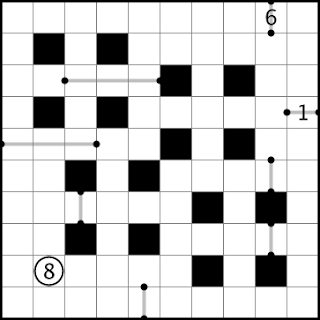 So what with having a thesis to finish off ASAP, perhaps, dearest reader, you'll forgive me for being a little obsessed with joining up fragments of loop in (sometimes punctured!) topological discs.

I've also been pondering the similarities and the flaws in two seemingly different puzzles: Slalom (or Suraromu to give it its imperfectly Anglicised title), and Bahnhof.  The latter is not German in origin - I've used Bahnhof purely because I had only ever seen the puzzle on the German based croco puzzle website - and roughly translates to "Railway Stations."  Rather simpler would have been to use the title "Railroad Tracks" - thanks motris for setting me straight on this one.

Anyhow, the idea to Bahnhof (I'm going to stick with that rather than make more drastic edits to the post, that's just the way it's going to be for now) is simple: draw a single loop in the grid using all the cells, and so that the loop travels through each numbered "station" without turning and in order.  The loop is only allowed to cross itself at marked intersection points.

I'd like to take elements from both these puzzles to try and get past some of the flaws to both.  I don't much like the intersection points in Bahnhof; pretty much every Bahnhof puzzle I've solved seems to use these as  the main break-ins to the puzzles.  I also don't like how most puzzles only very loosely use the ordering constraint.  Slalom, as I'm sure I've blogged before, is a beautiful idea for a puzzle making strong use of the ordering constraint, but it is somewhat crippled by its susceptibility to uniqueness strategies, in much the same way that Numberlink thrives upon them.  I'm not sure the constraint of using every square a la Bahnhof is the way to save Slalom but watch out in the future for some attempts to reconcile everything nicely.  For now, here are some plain old Bahnhof puzzles, without crossings.  Enjoy! 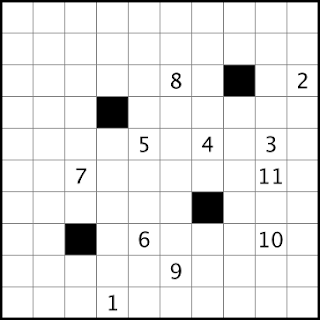 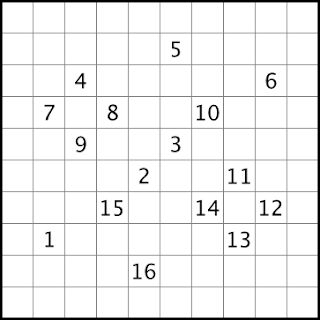 This week I have learned that drawing shapes in heyawake is somewhat easier than drawing shapes in nurikabe.  That 2 and 7 there on the left should probably be closer together, but given that it's now a quarter to three in the morning I do declare myself happy with this puzzle.  Enjoy!!! 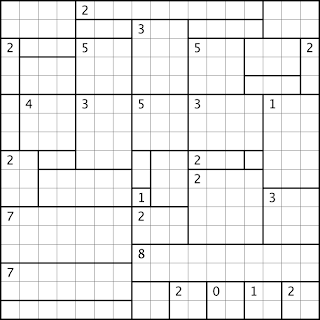 So this link is only going to look vaguely impressive until the 10th of August, after which you'll have to scroll down to number 141, but I'm quite proud of this one, despite "only" finishing 3rd behind a couple of Japanese solvers with championships already to their name earlier in 2012.  Hurrah!

So a fairly easy choice of puzzle type this week.  I've only gone and spoiled you with a slightly larger puzzle.  Was tempted to try something with twisted symmetry, but any sort of symmetry went out the window when the main motif I wanted was 8 cells high and 17 wide.  It's making for quite a nice theme for the next week or two though.  Enjoy! 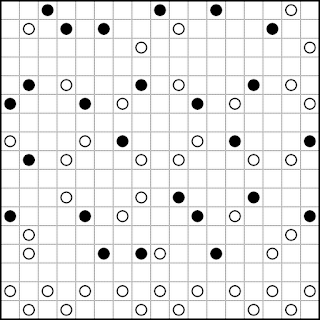