it feels like the tumbleweed has been gathering on this blog for a little too long.  Having seen a 10x10 anti-symmetry Masyu authored by my good friend Rob V on croco puzzle early this week, I wanted to see whether I'd lost my touch... 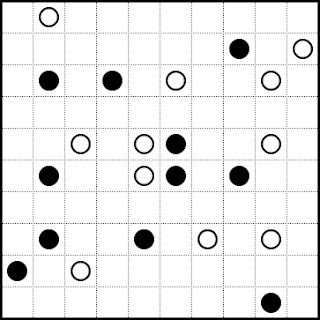 Well I suppose this post is a bit late, but as a word of explanation to any of my dearest readers who still return to this dusty old corner of the internet every now and again I would like to say that I have been somewhat preoccupied with being ill, and then catching up to prepare Round 2 of the WPF's Sudoku GP.  (Why not give it a go!)

As such puzzle making has ground to a halt.  I don't really have anything to offer this week either, but maybe next week will be different!  What I do have, for the masochists amongst you, is a "Darts" puzzle.

All you need to do is pick 5 candidate numbers from this list which sum to the given total of 2016.

I have no idea whether this is easy or whether I have turned things up to 11.  What I will say is the intended solving logic reduces things nicely, if you happen to find it!
By Tom Collyer at 01:15 No comments:

One of the joys of being a member of the international puzzling fraternity is the variety of people from around the world that you get to meet.  Whilst at the World Championships held in Sofia last October I was very pleased to make the acquaintance of some of the Chinese team, a formidable group of solvers whose brilliance is all the more remarkable given their young age.

I was even more pleased to receive a thick wad of printed monthly tests that the BEET "Brain Extremely Exhausted Time" Puzzle Club have put together.  There really seems to be no end to the number of puzzles I could be solving before we all meet again.

Anyhow, we have maintained correspondence and I'm very pleased to have been given permission to share a recent monthly test with a wider audience.

The title of the contest is:

With thanks to YangPei for authoring and Righthand for testing.  It's a lovely set of puzzles with an interesting challenge at the end to tie everything together.

Finally, whilst it seems a little fruitless to provide a link given that I'm sure the majority of my dearest readers won't be able to understand the website, and indeed my would-be dearest readers in China have various issues trying to reach any link on Google's blogger platform, I will do so anyway out of politeness: 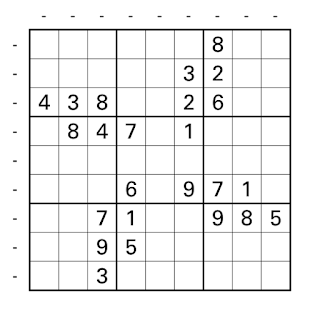 Everything In Its Right Place

So one particular reason I have for keeping this blog going, rather than packing up shop and jumping fully aboard the GM Puzzles train, is that it allows me to maintain an independent voice.  Also, I'm pretty sure I've used that particular Radiohead song title as a post before, but really it's too good not to use for a post about the classification of placement puzzles.

It's always a pleasure to look back through the year's "Best Of" puzzles, however I thought it rather odd that a Scrabble puzzle was classified as a "Number Placement" puzzle.  The justification given was:


Creating a complete puzzle taxonomy is challenging. Here at GMPuzzles we limit ourselves to just five logic puzzle categories, but that means our “number” placement term may seem a misnomer when you see logic puzzles with letters or words like our first winner here. At GMPuzzles, whenever a transformation of letters into numbers or other symbols could leave a fundamentally identical puzzle, we consider “Number Placement” to be the proper categorization.

I think I'd like to challenge the thinking here.  Basically I think all scrabble puzzles are fundamentally object placing puzzles, where the objects being placed are words. Whilst the letters that make up the words are obviously important to placing the words, words have other properties, such as their length, which go beyond any property of their constituent letters which allow them to be placed.

Moreover, a number placement puzzle to me has its numbers constrained by the grid itself in some way - for example a latin square, or a marked inequality, or some outside clue.  I can't really see how the letters in a Scrabble puzzle are constrained by the grid. They are only constrained by the words that they are contained in. Of course some of the scrabble variants on GM puzzles do have additional grid decorations but I'd argue they are still primarily object placement in much the same way that I'd argue a Battleships Sudoku is still primarily number placement, even if a large part of the puzzle is indeed object placement.


I have a couple of corollaries to this line of thinking, which are hopefully food for thought:

1) A trivial spelling mistake in a Scrabble puzzle ought not to be judged incorrect where it is clear that the misspelled word uniquely represents the word which was to have been placed.

2) Once you have decrypted the clues, any crossword becomes an object placement puzzle.  Put this in contrast to Kakuro, which is alternatively known as "Cross Sums", which by virtue of its grid-inherent constraints on the numbers to be placed put it firmly in the category of number placement.
By Tom Collyer at 20:16 1 comment: