I'm quite fond of this irregular layout.  Hopefully there'll be some more WSC discussions too.  I'm sure you'll have noticed that clumsy linkbar I've added there at the top.  Enjoy! 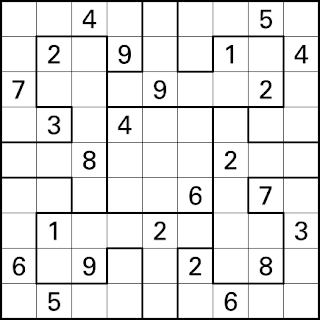 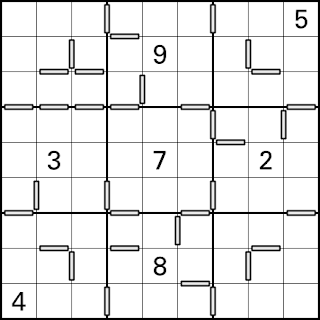 So you may have noticed that a lot of my Sudoku feature 24 givens, which is a good symmetric number lending itself well to aesthetically pleasing designs, whilst providing plenty of flexibility to get a unique solution out.  You have to be a little more ingenious as you start dropping the number of givens, so I thought this week might be a nice opportunity to try 22.  Although you perhaps have to be a little more wary of the patterns you pick, it seems 22 isn't so much of a problem, and this week's puzzle isn't so hard either.  And perhaps it tells you something about my standards that I've chosen to publish this puzzle here.  Enjoy! 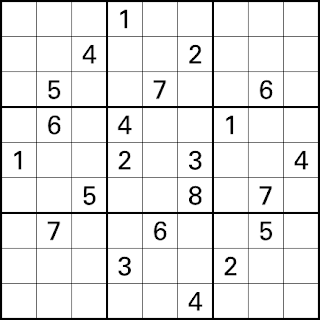 Can't say I've been blessed with too much inspiration this week, Dearest Reader.  I've yet to make my mind up whether this variant is any good.  I suspect it might be, I've just failed to make a puzzle that really uses the constraint in a neat and imaginative way.

Anyhow, if you've forgotten the rules, consecutive numbers on the lines must differ by at most 1.  The more mathematically minded of you won't need reminding this includes 0.  Enjoy! 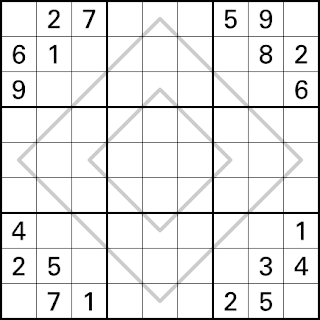 Endurance at the WSC

This is a post in a series of blogs where I'd like to engage the Sudoku community in various discussions relating to the World Sudoku Championship.

So I was pleasantly surprised by the wealth of wisdom and good discussion that followed on from my first post, and I hope that continues.  For this post I'd like to pick up on one comment from that discussion that opens up a new discussion:

my 2 cents to begin with, dont have too many rounds. it becomes a test of endurance rather than a test of your solving skills.

In my eyes endurance comes down to two different issues.  Firstly, there is the number of rounds, and secondly there is the relative length of these rounds.

To begin to address the first issue, it is helpful to examine the typical schedule of a WSC.  This has varied from year to year, but generally the entire competition, including individual rounds, team rounds and play-offs has fit into two days of competition.  A day is typically split up into morning, early afternoon and late afternoon sessions.  I've done a little (hasty - please point out any mistakes) research and summarised the information in a table.
In terms of the first issue, we can see that a WSC is decided over roughly 5-6 hours of competition, with not too much variance.

This brings me on to the second issue, length of rounds.  In my research there were basically 3 types of round.  The first are shorter, 10-30 minute rounds, which are typically sprints or one-off novelty.  The second is the more bread-and-butter style rounds which are typically 35-60 minutes.  The third seems to be very much the exception, the longer 90+ minute rounds.

As far as I can tell, there have only ever been 3 such rounds: the 120 minute round from Zilina, and the two 88 minute rounds in Beijing.  In contrast, I found it remarkable that no round was longer than 45 minutes in Philadelphia - which I have long regarded as the gold standard for a WSC.

My first post has already discussed the potentially skewing effects longer rounds can have, given they inevitably feature many harder variants; instead I'd like to look at things from an endurance point of view.

The first thing to say is that every now and again most solver will have a bad round.  The days are long and intense at a WSC, you are perhaps battling the effects of jet lag and so it seems inevitable that your concentration will lapse.  If this happens half way through a particular round, then the longer the round is, the more you will be punished.

A slightly different angle, which every solver is familiar with, is when you get halfway through solving and you find that you have made a mistake.  I know that when this happens to me it can often cause me to lose focus and confidence and affect the rest of my round - particularly when the puzzle is worth lots of points and I don't want my time to have been completely wasted.  Again, the longer the round is, the more you can end up punished.

The argument then goes that if you have more and shorter rounds, there is more chance to reset your mind and recover during the breaks, and approach the round after a bad one in a much better frame of mind.  One bad round doesn't have to make or break your championship.

As a counter-point, I'd also like to remark that most online competitions are typical 120 minutes long, and might be argued to be bigger tests of endurance than any single WSC round.  But regardless of the length of the competition, we tend to see the same old names at the top the majority of the time.

I could go on for longer, particularly with regards to WPC influence where rounds are often longer, but I think now is the appropriate moment to let my audience make up their own minds, and offer their own perspectives and insights into the issue of round length.  I look forward to your comments!
By Tom Collyer at 15:56 19 comments:

Chronological order is overrated.  For the week before last's puzzle, I thought I'd introduce all my dearest readers to the wonderful puzzle that is curve data.  I'll try and write up a rigorous version of the rules soon, however part of the beauty of this puzzle is just how intuitive it is, so I'm sure you'll all soon work out what is going on.

Re uniqueness, this seems to be a bit like numberlink for me, so perhaps bear with me on some future puzzles.  I'm pretty confident these are all good though!

The first puzzle is a somewhat narcissitic-yet-trivial example - although hopefully it clarifies exactly what you are supposed to do with loops. 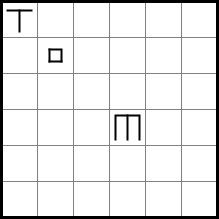 Maybe this next one isn't quite a medium, but seeing as it's the first one for the blog I'm going to relax my strict regime just this once!

EDIT: A previous version had rather more solutions than I thought.  This one I think is unique!
2nd EDIT: It isn't!  Back to the drawing board... :)
3rd EDIT: I got someone to test solve this first :p 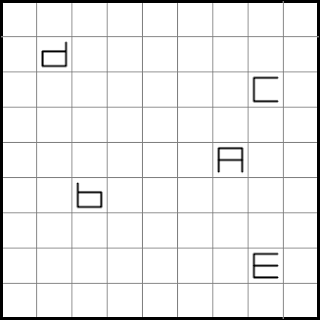 I'm going to keep this brief, Dearest reader, so I don't take too much attention away from my previous post.  Only even numbers are allowed in shaded squares.  Enjoy! 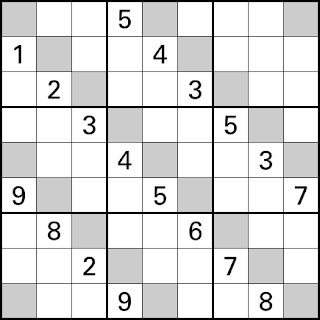 Points scoring at the WSC

The traditional model of the WSC goes like this.  The organisers will fashion together a set of puzzles of various types, and then group them into a number of rounds.  The puzzles will be test solved by a number of testers, and their times will be aggregated, and each puzzle will consistently be assigned a number of points according to how they tested.  For example, if we have decided each championship minute should be worth 10 points, a 2 minute puzzle will be graded as being worth 20 points.

I think there are a few things worth discussing here, but the first I'd like to concentrate on is that there are Sudoku puzzles, and there are Sudoku puzzles.  For the former, read things that are generally well known and recognised as Sudoku, your classics, diagonals, extra regions, odd/evens, irregulars and killer.  For the latter, you are almost encroaching onto WPC territory with things like Greater Than, Kropki and Skyscrapers - all of which exist as standalone Latin square puzzles without Sudoku's trademark Third Constraint.

At every WSC round there is inevitably (at least one) long round, typically 45 minutes to an hour, or even longer, full of challenging Sudoku variants (see also the Daily League project) that if you were to show them to the general public, you could be sure of a reaction of bemusement and bafflement.  Due to the length and difficulty of these rounds, they are usually the rounds that score the most points and decide who finishes where in the classification.

As such, the winner of the WSC tends to be the best all-round solver, combining a mix of WPC skills and raw Sudoku solving speed.

I think the balance used to be weighted much more to WPC skills than it was.  For example, in 2006 Rachel Roth-Huber bested David McNeill (and my good self!) at the Times Su Doku Championship.  But the following spring at the WSC in Prague, David - a WPC veteran - finished 4th, compared to Rachel who finished way back in 66th (for reference, I was 45th).  This is not to say David does not possess exceptional raw Sudoku solving speed (he certainly does), but I would certainly have forgiven you for expecting the gap between the two at the WSC to be a little closer.

These days, the WSC play-offs form a large (although not perfect) overlap between the best all round solvers and the quickest classic solvers, which I think is probably testament to the fact that Sudoku solvers have generally improved their puzzling skills.

However I'd like to finish by asking my audience to question this paradigm.  What if it were decided to place (for the sake of argument) a 0.8 multiplier on the long variants rounds at the WSC, to place more emphasis on the friendlier, more publicly recognisable puzzles?  Would this be a good idea?  And do you have any other thoughts regarding WSC scoring?

I'd love to know everyone's thoughts on this, no matter what kind of solver you are!
By Tom Collyer at 11:48 27 comments: