So I think for 2017 this blog may well be just sudoku and variants - however I will be posting links to Grandmaster Puzzles as and when my puzzles there get published.

Lets see how it goes, dearest reader.  As ever, hope you enjoy! 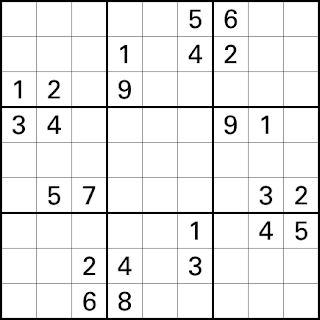 Last year (2016) I was in charge of the WPF's Sudoku GP series, which was a very interesting and exhausting experience.  This year, I've taken a step back and am able to enjoy competing in the competition.

My first impressions involve a little disappointment in the downgrade of publication quality - the competition is no longer published using vector graphics, and the typeface has been changed from Helvetica to Arial.  The changes are minor and the untrained eye is unlikely to notice any difference, but the major gridlines seemed much too thick to me, especially in comparison with the width of the printed givens, which is unfortunate because the givens do not stand out as much as they should.

Minor gridlines cannot be any thinner than a pixel if the graphics are not in vector form (although you can kind of approximate by colouring them grey rather than black), which is unfortunate as this is a big limitation on the ratio of major to minor gridlines.  This is a very important ratio in the aesthetic of a sudoku grid!

EDIT: This is not quite true - whilst the entirety of the IB is definitely not vector format, the CB puzzle grids do seem to be vector format (although bizarrely the text in the CB is not...).  In any case the thickness of both minor and major gridlines has increased, which is ultimately the point I am trying to make.

With regards to the differences between Arial and Helvetica: they are minimal, but the former is a piss poor imitation of the latter when it comes to R's, G's and (most relevant to a Sudoku grid) 1's.  The Arial 1 is a nasty piece of work.  There, I've said it!

All that said, I also know how much work goes into producing work of publication standard.  The director's first responsibility is there puzzles - it's a nice bonus if the director also has skills in the area of publication, but otherwise this is all work for a separate role which hopefully the WPF can sort out.  From this point I suppose I will try and leave any further comment on publishing unless it it directly impacts the solving experience.

So, on to the puzzles themselves.  Round 1 of the GP is normally organised in a bit of a rush, particularly if there is a new director settling into the job, so it is great to have reliable hands like Richard Stolk and Arvid Baars who can step up and produce a high quality round at reasonably short notice.

From a personal solving point of view, I've historically not fared too well with Richard's puzzles in competition, but I've now also solved a lot of his puzzles and I think I'm getting better.  I was therefore optimistic about having a good round and generally getting back to solving at a high standard.

I solved the first four to ease myself into the competition, and they all seemed nice enough.  The 5th I came back to a bit later, which was definitely the hardest of the set but pleasingly not at a guessing level.  The 6th I had 3 minutes to solve at the end of the round, and rather frustratingly didn't get out in time.  Not sure there's too much more to be said about the classics other than they were at the reliably good standard I've come to expect from those two.

This was easy as the points total suggested, however I cocked this up during the 90 minutes and didn't have time to come back to the fresh copy I printed off.  As the mistake came quite early in the 90 minutes this may have thrown me off a bit.

A reasonably tricky puzzle which I got half way through before setting aside and only came back to much later in the 90 minutes.  There was some nice logic determining what a few of the Renban groups were by noting the possible min and max values for the groups

It's a bit annoying that XV Sudoku has suddenly become Sudoku XV, but it was definitely annoying that I managed to cock up another easy puzzle without having time to come back to it in the 90.

Very striking given consecutive bars - usually when you have something like this the non consecutive constraint becomes even more important, which makes for a bit of a fiddly solve.  This puzzle was a bit like that - a little hard to get in to, which reflects the high points value but once you were the overpowering non-consecutive constraint took over.  I suppose puzzles like these are why given the choice I prefer Consecutive Pairs, where the converse rule is not in place.

A quick note here on the instructions for this puzzle:


Apply classic sudoku rules.  In all cases where two neighbouring cells contain consecutive digits, a grey bar is placed between those cells.

This is more concise and compact than rules I've written, and the reason for this is because it is not immediately clear to a beginner what the "all" is implying (i.e. that a non-consecutive converse is also in effect).  This is dangerous for a puzzle like this that is ultimately dominated by the non-consecutive constraint - it is easy enough to satisfy the grey bars and then arbitrarily fill out the rest of the grid without quite being sure why such an answer is incorrect.

As another matter of taste, I much prefer to refer to placing numbers rather than digits.  This way you can reserve the term digits for variations which make use of strings of placed numbers.  Placing numbers is also a nod towards an early name for Sudoku, which was of course "Number Place".

Easy enough, but common to this variation its often easy to miss the one thing you need to make progress in the puzzle.  This probably took me too long to solve.

A novelty to me, a cute idea but perhaps not a variant with much staying power once a few gimmicks have been explored.  This seemed to solve relatively nicely given the high points tally.  I'm not quite sure why this isn't "Max Ascending" with a space.

A Richard/Arvid specialty.  Both are capable of making this variant really quite tricky, but this one was a little friendlier and didn't cause me too much of a problem.

X-Sums in an irregular grid is nothing new, and the scattered grid is only a mild relaxation of irregular regions so I don't really count this as a novelty.  The overly thick major gridlines provided sufficient contrast with the (overly thick) minor gridlines - I suspect I'd have been quite annoyed if there were givens in the grid being visually overpowered - but there weren't and it solved quite nicely.  Probably took longer than it should have, and there was a brief moment at the end where I thought I had another cock up.  Luckily for me I was able to fix it.

I think I've possibly seen this (or something similar) as a Daily League puzzle in previous years, but this is likely to be novel to most.  I didn't think I'd be a big fan of this based on the pig of an example in the IB.  Perhaps it's a little too puzzle-y for some tastes, but the observation that there are only 15 unique sums of 2 digits means that it's potentially very quick to ascertain the value of the 12 ordered cages and then solve very quickly as an easy Killer Sudoku.  This was the only puzzle I didn't look at in the 90 minutes at all, which is a shame as I'm pretty sure I got it out in the 3 minutes I had at the end.

Overall a nicely balanced set, one which I think I might have finished on a good day, but on this day I managed 11/15, scoring 483/600 points.  No submission errors is definitely a positive for me!

Top 3 Overall are (results are preliminary at the time of writing):


Also good to see a return to competition from my GM Puzzles colleague, Thomas Snyder in a very creditable 4th.  The competition at the top will certainly be fierce this year.


I suspect the UK top 3 will be a permutation of these three names, bearing in mind David McNeill isn't participating, and Neil Zussman is just plain lazy.  I would love to be proved wrong and have a UK newcomer come to shake things up!
By Tom Collyer at 22:42 3 comments: