Greetings all, and apologies for the delay. I’ve been a little bit distracted in the last few days, but as they say, better late than never.

A plain old Masyu puzzle this week – not quite from the juno textbook but hopefully still a nice enough solve:

Edit: I offer my apologies to anyone who had a go at early versions of this puzzle and were frustrated by the multiple solutions that could have been arrived at, and my thanks to mathgrant whose helpful comments helped me to fix it! 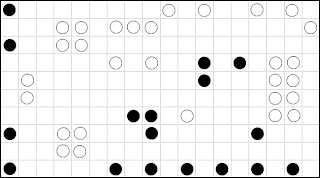 In the last couple of days, I’ve engaged in a discussion on Thomas Snyder’s blog about the subtleties, nuances and differences between computer-generated sudoku puzzles, and human created puzzles; in particular if there is a line to be drawn, and just how blurred it might be. If you are interested in that sort of thing, some fascinating things are discussed.

Inevitably, I’ve taken a bit of inspiration from that and I’ve made a sudoku puzzle for this week, all by myself! I’ve used a slightly infamous pattern – which if a computer generator was left to its own devices to find would probably give you something turned up to 11 (again) – but perhaps said computer generator could be programmed to a certain set of rules, and perhaps it could put out a puzzle with a similar difficulty level without taking an hour and a half to do so.

Either way, I’d like to think that you, dearest reader and most loyal of solvers, might feel something of a human touch in this puzzle. Enjoy. 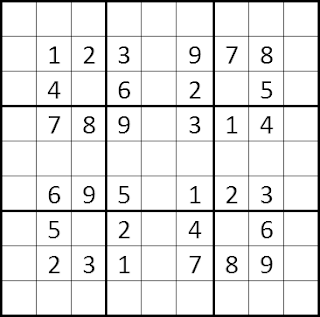 Another nurikabe puzzle this week. This one started as a 10×10 puzzle that I thought I’d turn the dial up on slightly. Although perhaps to some people’s disappointment I didn’t quite get as far as 11. Alas. Anyway, it’s a little bit silly – but the whole numberlink/nurikabe logic overlap in the Puzzling Plane still interests me, and there is probably a little more to play with yet. Expect a similar puzzle in the next coming weeks. 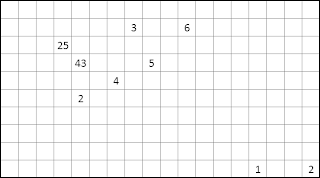 After a little delay, here’s a nurikabe puzzle. I’m increasingly realising that the nurikabe I write have a different feel from a typical nikoli puzzle – but I don’t like to think of that as necessarily being a disadvantage. Another thing that gets raised in my more neurotic and existential crises about the purpose of this series is that I don’t seem to have many (any? – I can’t remember) hard-rated puzzles. Luckily my conscience is soothed with a nice healthy dose of logic with the realisation that the size of the grids I’m using is a bit of a limiting factor on all of this.

And if you believe all that, you’ll believe anything I write in these blurbs. Honest. 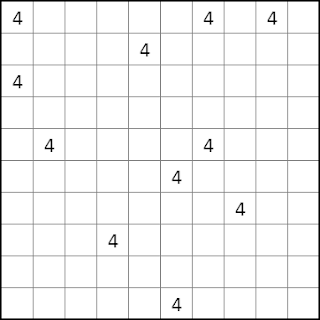