Not a Friday Puzzle

Here's a Masyu I put together, because I really enjoy putting Masyu puzzles together.  There are a few moments where you'll need to watch your step if you aren't so familiar with genre, and maybe even if you are.

By the way, I've updated how I rate the difficulty of my puzzles.  You can read more about it here, if that kind of thing floats your boat. 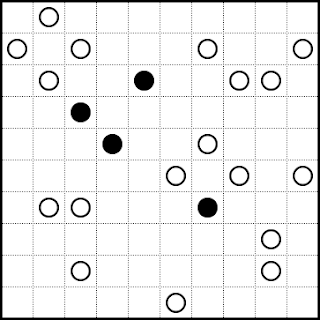 A small correction to the record

As much as I have tried my best to avoid having conversations about the puzzling community, it seems that I am still the subject of whispers and rumours.  This is something that I ought to find amusing and pathetic in equal measures, and I definitely do, but something about it is still bothering me a little bit.  So here goes, better out than in.

It seems as if there is a perception that one of the reasons I have been previously critical of the WPF is as follows.  At a time, I coveted the role of being the WPF's sole paid employee (misleadingly titled "Director").

This is ridiculous for any number of reasons, but here are two very good ones:

- I have posted numerous times that my opinion is that those anywhere near the organisation of competitions they are responsible for should not also participate.  I enjoy(ed) participating in sudoku and puzzle competitions for many years, particularly at the world championships, and I have stated several times that I don't think the Director should participate competitively.  My supposed desire to be Director at any point in time directly contradicts what I have stated several times.

- The WPF doesn't pay nearly enough compared to my current full time job to really consider this worth doing on anything other than a part time basis.  Having previously volunteered my time as the competition director of the Sudoku GP in 2016, I know this would have to mean changing my current employment arrangements, or else being miserable because I had no spare time.  Neither of these options as ever struck me as being attractive.

I should have thought the true reasons I have previously been critical of the WPF are entirely self-evident.  If that's not the case, then too bad, all that stuff is something I have zero interest in revisiting.  To absolutely clear, my current opinion of the WPF is this: I do not give a flying focaccia about the WPF.

All I'd like to add is that it is my opinion that the source of this particular rumour is either a liar or a fantasist.
By Tom Collyer at 13:51 3 comments: