I've run out of time to add the final polish, but there should still be enough here to keep you busy.  Cages are clued with the sums of numbers to be placed inside them; no repeats within cages. 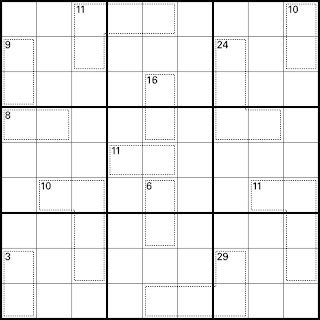 Non-Consecutive Sudoku this week.  Cells that share an edge are not allowed to contain consecutive numbers. 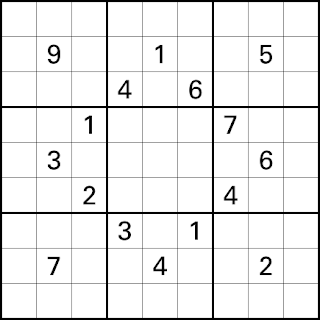 So on to round 3 of the GP.  Again I'm writing most of this straight after solving without being able to reference the results.  The authors this time were individual world champion in waiting, Jakub Ondrousek, and probably the world's most prolific Sudoku author, Jan Novotny.

To start off, I think that the balance was better than the previous round, but it still wasn't quite right and the puzzles didn't quite have the redeeming feature of being as dazzling brilliant as Bastien's puzzles.  Don't get me wrong, comparing less favourably than Bastien is nothing close to an insult; these puzzles were good, and occasionally great, but nevertheless the comparison is there and I'm calling it as I see it.

I should probably also draw some attention to controversy before the round.  I didn't see this, but apparently the instruction booklet was leaked onto an external website before it went live on the GP website.

EDIT: exactly how this happened has now been explained - in the interests of balance I would encourage you to read what Jan has to say. I do have some sympathy for the desire to encourage new solvers.

However my opinion is this remains inexcusable - and whilst I doubt many solvers gained much of an advantage from this, it still looks bad and definitely tarnishes the reputation of the WPF and the GP in my eyes.  I can only imagine how frustrating this will be to the competition director.

That unfortunate episode aside, here are how I rate the vital stats for the round:

Let me add again that enjoyment for me is a personal thing, and is affected by how well I thought i was solving as well as the overall quality of the round - which by and large was of a good standard.  Without further ado, here's the review:

Just looking at that points distribution tells you the whole story.  The first four were easy to the point of being trivial.  The last - I've confirmed with scanraid - was a guessing puzzle.  These always leave a bad taste in my mouth and I whole-heartedly wish they would stop featuring in competitions.  Please authors and competition directors, enough of these puzzles!

As for the first four puzzles, although you can see there was a visual gimmick with first the Czech flag, and then a C, then Z, then E theme, I think this is a prime example of where the theme of the puzzle proves to be a negative rather than positive.  Nice enough puzzles I suppose, but these were simply too easy.  The fact that the classic contingent made up less than 100 of the 600 points on offer also points to a bad balancing of the competition, in my opinion.

I suppose you might generously say that overlapping might count towards the classic contingent of puzzles, which puts the balance up to a less unflattering 25% of the points for classics. The puzzle solved nicely, although I do wonder about the presentation here. I'd be interested to try this with one of the overlapping grids shaded grey - I generally find the dotted lines for the 2nd grid to be a little distracting - but it's hard to say whether this can definitely be improved without a bit of experimentation. Aside from this, it started a run of "CZ" themed variants.

A nice enough diagonal puzzle, with a CZ theme.

There were probably more givens here then strictly necessary, but given the remaining variants in the round were all quite difficult, a nice easier variant was definitely welcome. Again with a CZ theme.

Personally, I prefer "Non-Consecutive" but there we go. Not a particularly polished solving experience, it nevertheless had a fairly narrow solving path which might have left some solvers stumped for a while. Another CZ here!

I didn't have time for this in competition, which is probably wise given recent experiences with fortress puzzles. After time, it solved nicely enough. Yes, another CZ theme here!

I wasted a lot of time on this during the competition, having felt my way into what felt like an opening. I had then convinced myself that I'd made a mistake. Solving it after time it turned out that I hadn't, I just hadn't considered one remaining option - the correct one! This being the biggest pointer in the competition, this was definitely annoying! Also a temporary reprieve from all those C's and Z's.

The clear star of this round, combining elements of diagonal and anti-diagonal all into one puzzle. It was a little fiddly to finish at the end, but really I'm splitting hairs with what was really an excellent puzzle. And the last of the CZ's to boot!

I didn't get the logic with this one - after wasting a lot of time on an abortive effort with this one, I managed to guess my way through. Maybe I've missed something clever here, but that in itself is enough to take some of the enjoyment away from solving.

The massively contrived instructions could only ever point towards a one-off gimmick - I can't see any other authors making much more variant with this type. Once you realised that the lonely number had to be in R5C5, this basically reduced to quite a tricky (but otherwise unspectacular) Touch Sudoku variant. I was quite pleased to get this out in the last 7 or so minutes, whilst fixing what would have been an irritating error with about 10 seconds to spare.


So, 12/14 solved in time. There were definitely a couple of tricky puzzles here, but I don't think this will prove as difficult as round 2 and so with the points that I left on the table I'm not going to end up with a particularly good ranking. From a personal perspective, I wasted far too much time trying to do the 5th classic without guessing, and then got bogged down with Mathdoku and Fuzzy Arrows. This happens every now and again, particularly when I'm not quite fully on my game. I would say there's always next round, but I am co-authoring the next round with David McNeill and so won't be taking part.

As a general comment, it seems like there is a consistent pattern to be observed.  Last year the top finisher was typically done in 60 minutes (900 points).  This year the top finisher is closer to 65 minutes (850 points) - an early indication that points towards the 2017 series being slightly harder.  Alternatively, maybe we collectively haven't quite warmed up yet.  Time will tell!

As for the Brits:

Bad luck to Mark, who had submitted 13 answers with 2 errors - without these it looks like he was pushing top 20 for the round, which would have been the best showing so far.  Also good to see other UK solvers within an easy puzzle of the top 3: Neil (8 points) and Ned (23 points).
By Tom Collyer at 22:58 15 comments:

Odd sudoku this week.  Only odd numbers are allowed in the shaded cells. 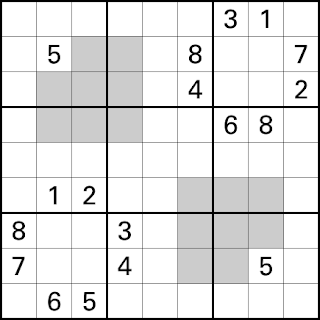 The difficulty this week is turned down a little.  Enjoy! 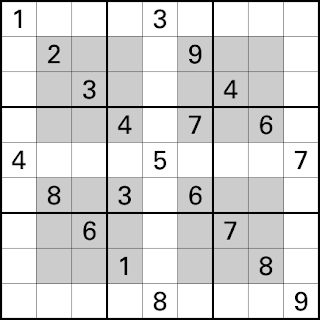