Permit me, dearest reader, another week lingering over my LMI test from a couple of weeks back. The Suraromu puzzle I put together was one of the puzzles that was most well-received, which is nice because I put it together very quickly one dark March evening just before bed after seeing this MellowMelon puzzle that I thought was really cool. My puzzle definitely has a pleasing logical path in solving it, but I hoped the fact that I paired this puzzle on the same page as the Numberlink puzzle was not lost by LMI solvers! Sadly, with that constructor’s note I should probably label this only medium, but I hope that you, dearest reader, appreciate the novelty with this one! 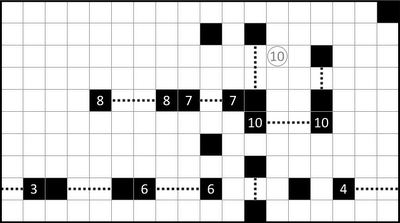 Now onto this week’s puzzle. Whilst I have been fully aware of a set of wonderful java based applets from long time friends of this blog, the Jankos for a long time now, I have always been a little reluctant to add an interactive side to the blog so far. This has partly been because I don’t really have that much control over the bare-bones coding of the Warwick blogs system (for example, my recent gripes with the blockquote marking apparently no longer working), partly because of the fiddling around needed with input strings and so on, and partly because I like to have some control over how the puzzles look. A puzzle is still a puzzle even if it has a bit of a facelift, but I’d prefer it if my puzzles retained as homogeneous a look as possible.

Which is why I was rather excited when fellow maths Ph.D student here at Warwick, Rupert Swarbrick, approached me with a little toy Akari web script that he was inspired to write after seeing my puzzle a couple of weeks back.

The script itself is wonderful in that it is very clever, very simple, is fully customisable with its appearance via CSS, and generally makes me very happy! So with all that said and done, how could I not write another lame 10×10 Akari this week? I’d almost say this one was hard, and certainly the configuration here probably deserves to be sent to 11 some time, but as with 10×10 Masyu, I have big reservations about calling any Akari this size hard. So medium it is – enjoy! 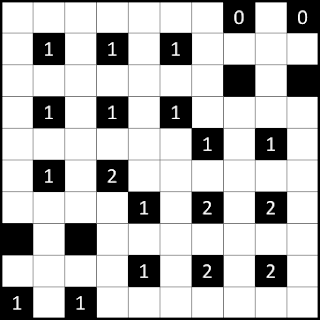 So I’m going to dwell a little on the recent LMI puzzle test I put together. Whilst I had always meant to try and set the record straight after the last disastrous puzzle test I had authored for LMI, I only really started getting the impetus to put together a set of puzzles whilst idly sketching out this puzzle. I was very pleased with what was firstly a very pretty design, but also the very hard nature of the logic involved in solving it. There is definitely a solving theme, one slightly expanded upon from this entry – which is hardly surprising as this puzzle was written very soon after I’d done this one. 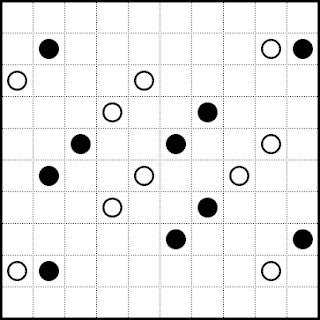 Funnily enough, all the puzzles were near enough done in no more than 2-3 weeks after this, and actually what was causing the delays were all the boring bits associated with putting a puzzle test together – answer keys, formatting and so on.

Anyway, I was on the train coming back to Coventry with a couple of hours to kill on Monday, and I found myself putting together a few Masyu ideas. Ideas which I couldn’t quite perfect in terms of cool new tricks – but the upshot was this puzzle, which again looks nice and pretty, and actually solves in a rather pleasing (albeit not so challenging) way too. Enjoy! 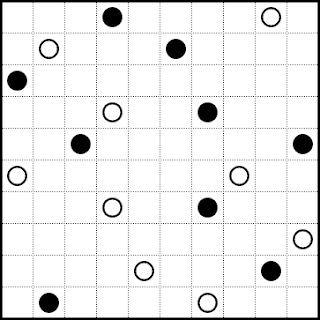 So I’m a little bit of a rush writing this entry, but let me make a couple of brief comments about how my Nikoli Selection LMI puzzle contest went last weekend. Firstly, I was very pleased to see lots of participation (even with a clash with a German competition) and that nothing went wrong. Reception to the puzzles seemed very warm and I’m glad that there was something in it for everyone.

Special mention has to go to the winner of the contest, Hideaki Jo, who had the main set of 16 puzzles solved in little over half the allotted time, before proceeding to destroy the 3 bonus “marathon” puzzles. I was expecting what with the puzzles being fairly tricky, answer entry and everything else that there was really only a possibility that 2 of these 3 puzzles could be gotten out in time, but Hideaki pulled off a stunning performance to get out all 3. Commiserations should also be offered to Dr. Snyder, who actually had the main 16 out faster than Hideaki (and actually slightly faster than my own test-solving times, which don’t take into account answer entry, and obviously aren’t the first times I’ve seen the puzzles), but tripped up on the larger yajilin puzzle, and could only manage a “mere” 2 marathons in time.

Anyhow, thanks for participating and making the whole thing a great success if you did, and if you didn’t, the puzzles are still up at LMI if you want to try them out. Like I say, if you enjoy the puzzles on this blog, you’ll love the test :-). 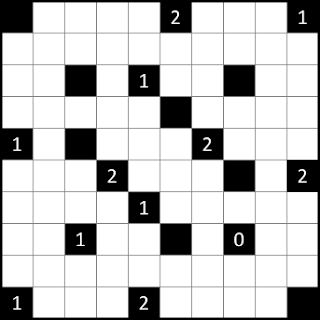 My fellow puzzle blogger Grant Fikes was kind enough to give me a preview of some upcoming puzzles he plans to feature on his blog, and you should definitely watch out for his entry next Monday. He also provides inspiration for this week’s puzzle, which I’m sure all my dearest readers will be pleased to see is on time again.

The idea is simple – make a 10×10 fillomino, with certain symmetric constraints. This is my first effort, which presumably is null and void for the purposes of the contest, but will hopefully act as inspiration for anyone else who might want to have a go. Upon re-solving this, it’s slightly less easy than I thought it was, which makes me think it’s a bit of shame I can’t enter this, but then I suppose I shall have to come up with something better than this. Anyhow, bearing in mind I haven’t made many fillomino (4? 5?), I’m going to be a bit cagey and call this a medium. Enjoy! 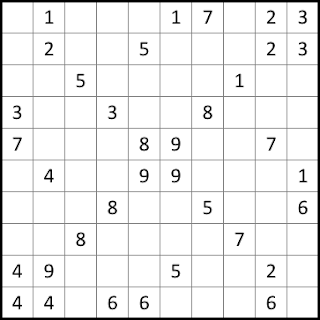 P.S. I hear there’s a great puzzle contest happening at LMI this weekend :)
By Tom Collyer at 02:02 4 comments:

This one is courtesy of yours truly. All I can say is this: if you like this blog, you should love this contest. I’m confident there should be something in this for everyone, from absolute beginners to seasoned puzzling champions alike.

Also, Friday Puzzles will be on time this week. Honest!
By Tom Collyer at 23:44 No comments:

So I completely forgot about this puzzle, which I wrote in a half an hour spell on the train on Friday. My apologies for its rather late appearance. Anyway, there isn’t so much to this puzzle, except for one little cute trick, which was enough to save this from the unpublished pile. Enjoy! 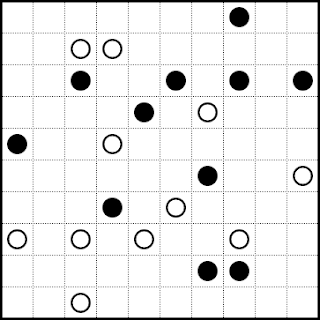