What do you know?  I've reached a landmark without realizing it and made a special for the occasion!

The grids from left to right are:  Classic Sudoku, Diagonal Sudoku, Windoku, Irregular Sudoku and Non-Consecutive Sudoku.  Where grid overlap, so do the extra rules (although note that this still means a digit in the irregular grid adjacent to the non-consecutive grid is allowed to be consecutive).  Enjoy!

So first things first - last week's experiment.  Perhaps all will become clear if I permute [in disjoint cycle notation: (163754)(29)] the labels of the givens of the second puzzle, and rotate the grid. 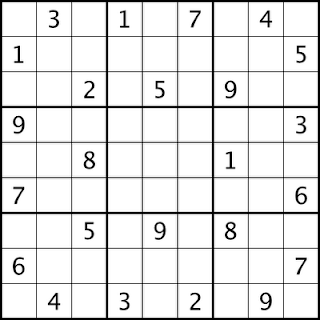 I'll leave the column switches to your imagination, but yes, that's right, I gave you essentially the same puzzle to solve twice.  By the same, I mean isomorphic - which is just a fancy way of saying there a set of grid manipulations you can perform on one puzzle to get to the other.  For the record, they are:

Notice that you can get a horizontal or vertical reflection via a series of both types of box shuffles, as well as a 180 rotation, although you can't - thanks Thomas - get a 90 rotation.  Put another way, there is a total of 1,218,998,108,160 (not counting any further symmetry within the partitions in the grid) things you could possibly do to turn one sudoku puzzle into a sneaky doppelganger.  Those are the sorts of figures one normally associates with national debts....

Now, I'm not going to do any formal analysis on the times everyone kindly reported to me.  I suppose for one thing I'd probably need in the order of 100's or 1,000's before being able to say anything worth saying.  However, my theory was that since both puzzles were isomorphic, the second puzzle people solved would be slightly faster than the first.  There ought to have been some sort of subconscious familiarity whilst solving, because combinatorially you could exactly the same thing to get to the solution!

I think it's fair to say that it didn't quite work out like that.  Granted, I put a little effort into making the puzzles seem as different as possible, but the varying times seem to indicate that exactly how the grid is presented makes a difference as to how people have solved the puzzles.

I guess the other interesting thing is that many good puzzle solvers completely missed what was going on, despite the meta-signpost of an experiment with two rather innocuous puzzles.  Perhaps some sorts of grids are more open to this sort of thing than others.  Anyhow, I'm going to leave the story there for now, but perhaps you'll be hearing more on the subject from Thomas S or Grant F in future weeks.

This week's puzzle is something completely different - Yajilin.  I made this hungover, and in rather a bad mood yesterday so don't be expecting too much, but do watch your step.  enjoy! 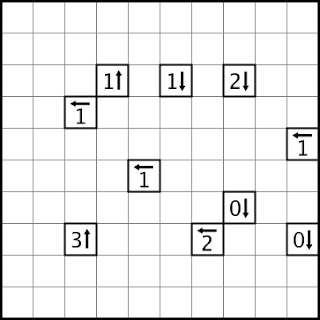 This week dearest reader, I invite you to come with me on something of an experiment.  Indeed, I spoil you - there are two sudoku puzzles for your puzzling enjoyment.  If you'd like to indulge my curiosity, then what I'll need from you is the following.  Firstly I'll need your solving times for both puzzles, and secondly I'll need the order in which you do the puzzles.  How you decide the order is entirely up to you.

Anyhow, if you could leave a comment below, or on facebook, or maybe even just e-mail me that would all be simply marvellous.

On the other hand, there's no pressure to do any of that.  Either way, enjoy! 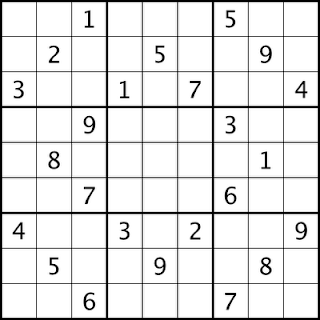 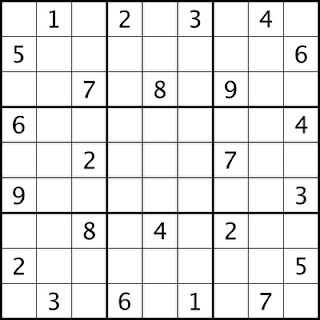 So I've been a little busy recently to get around to fully publicise this, but I've recently finished putting together the July edition of the UKPA beginners contests.  I say contest, but this month we've decided to go all open access and remove any need for registration or password.  Unfortunately this means there isn't any online answer entry this time, but we're working on an anonymous just-for-fun version for unspecified future contests.

Read more about it all here:
http://forum.ukpuzzles.org/viewtopic.php?f=8&t=631&start=0

Anyway, the puzzles featured are Battleships, Masyu and Skyscrapers.  And what do you know, I have another Masyu for you this week, dearest reader.  Easy - but only just.  Enjoy! 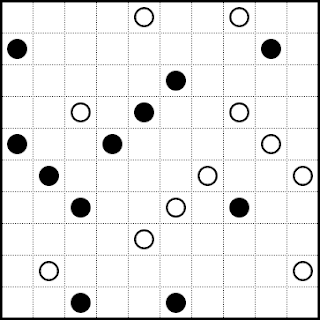