So before I really get started, I wanted to draw the attention of my dearest readers to a really remarkable puzzle I've come across in the last day or two, courtesy of 胡蒙汀(Hu Meng Ting) from China.  I'd probably give this one an 8/10 for difficulty on my scale.
https://logic-masters.de/Raetselportal/Raetsel/zeigen.php?id=000474
Scanraid rates this as a diabolical grade puzzle requiring all sorts of fiddly techniques to get through.  But it is also rendered much easier by a quick application of the so-called Phistomefel's theorem.  This, to the best of my knowledge, is first discussed here.  It's also been picked up and popularised by various cracking the cryptic videos, which I am too lazy to link to but I'm sure all my dearest readers are either already familiar with or else can find for themselves.
For various reasons, Hu's puzzle does not seem to getting the attention I believe it deserves in the logic masters community.  To me, this seems to be the first instance of a puzzle that really makes good use of the solving technique.  Previous versions of puzzles that have attempted to incorporate it have always had equivalent shortcuts using much easier solving techniques, and people had speculated whether this was of any practical solving interest.  Now we know!
Reading on in this thread I was pleasantly surprised to see a generalisation of the theory by Fred Stalder, which is well worth reading as well.
This will also help with another really remarkable puzzle, also courtesy of courtesy of 胡蒙汀(Hu Meng Ting).  This one easily gets a 10/10 for difficulty, and maybe even an 11 for the sheer genius of the puzzle
https://logic-masters.de/Raetselportal/Raetsel/zeigen.php?id=00048U
This one is unsolvable by scanraid, and is certainly not easy even when you are armed with both the theory, and the equally remarkable thread of hints to get you going - there is a lot of work to do to get through this puzzle, but it is just about doable.  I find this fascinating as what it really means is we are now shining a light on some of the hidden complexities underlying the structure of sudoku.
Anyhow, I am very grateful to cdwg2000 for sharing these puzzles and the theory and I shall certainly keep an eye out for anything else that they share, hoping that they haven't been discouraged too much.
All this talk of new and exciting theory has also made me a little bit nostalgic.  I am going to offer up nothing related to this particular subject (although I'd invite my dearest readers to take another look at one of the classics on the 2020 edition of the UK Sudoku Championship if you're interested).  Instead I feel like I've got a pretty nice execution of an idea that once upon a time was done to death.  Enjoy! 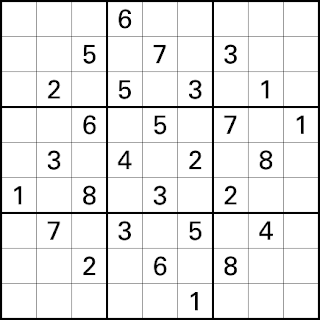 Here's another Masyu I've put together, because why not?  it's definitely one where some of the required techniques are starting to spill over into trial and error type things, especially if you haven't seen them before. Enjoy! 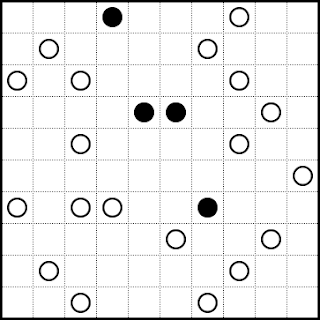 So once again I find myself wondering if a post is particularly well advised or not, but I've had a belly full of being made to feel bad about things.
In recent weeks I'd dabbled back on to a couple of discord servers, namely the puzzler club and cracking the cryptic.  I'm not really sure those discord servers are a particularly healthy way to have spent my time - whilst both represent some kind of community of like minded individuals, neither has given me the impression of being friendly or caring too much about individual users.  Having apparently withdrawn myself from the puzzling community a month or two back, it does feel like a mistake to have dipped my toes back in to those particular waters.
Anyhow, I found myself on the receiving end of a particularly snarky comment suggesting that I might be overestimating how interesting and useful my comments were, which seemed to me to come with an additional nasty implication that it would be better for everyone if I simply kept quiet.  Naturally I wondered if I had done something to offend this individual who had taken it upon themselves to speak on behalf of the group, but private enquiries with the individual in question bore no response beyond apparently blocking my messages.  I suppose that confirms the fact I have offended them in some way, although I'm none the wiser as to why.
This initially made me very frustrated, and in no small part angry.  And whilst this individual has succeeded in getting me to throw away logins and delete discord, and they can congratulate themselves on that, I have also taken this opportunity to see this one instance of a block, and re-raise that to a double block.
The rules to this puzzles go something like this.  In each row and column, you need to place the numbers 1-6, and shade the other two cells.  The clues outside the grid give the sums of the numbers in cells between the two shaded cells (which maxes out at 21 for everything, and hits 0 when they are adjacent).  In other words it's similar to sandwich sudoku.
All that's left to say to all my dearest readers who do still care in some way about what I have to say, enjoy! 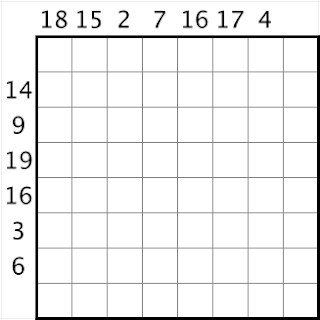