Last week's puzzle seems to have got lost in the Christmas Maelstrom.  Nothing too tricky this time round though.  Enjoy! 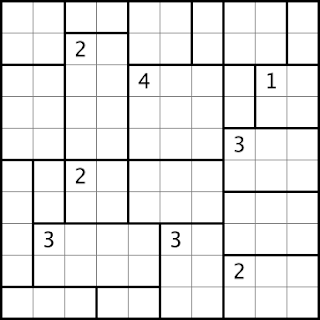 So most of my puzzles usually have an emphasis on the visuals, which then hopefully translates itself into an interesting solve.  The second part of the process usually requires a bit of polishing, which is something this puzzle could probably have benefited from a little more.  The first steps might be a little fiddly but you'll soon see why this is easy.  Oh well.

Numbers placed in circles must be the sum of the numbers (which can repeat) along the corresponding arrows.  Enjoy! 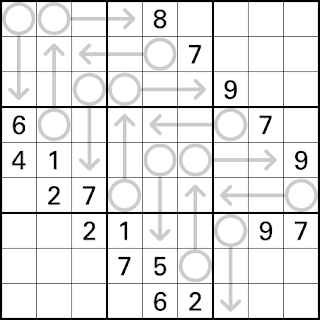 In case you didn't see, I posted an easy masyu for last week's puzzle.  This week, something much harder.  As always with this variant, numbers placed in cells related by a chess knight's move must be different.  Enjoy! 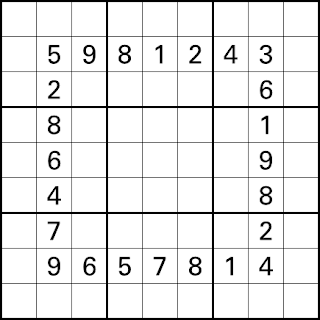 I haven't been feeling very well recently and could well be in need of a break.  Hopefully I'll edit something in a bit later.  Sorry.

It's been all too long since I posted one of these.  Enjoy! 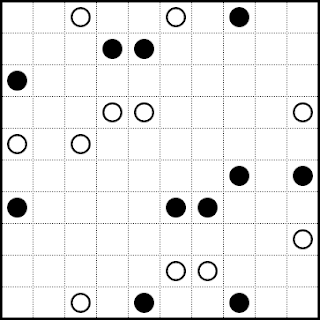 Participation at the WSC

This is a post in a series of blogs where I'd like to engage the Sudoku community in various discussions relating to the World Sudoku Championship.

The first two posts I've made have general been exaggerated versions of opinions I'm curious about, and wondering whether I have really considered all the relevant points of view.  Certainly not, I'm pleased to say given the excellent ensuing decisions we've had.
This time I'm going to jump off the fence and have a bit of a rant about something that is really beginning to annoy me.  Admittedly the examples I am about to raise have more to do with the World Puzzle Championship (WPC), but the WSC operates under exactly the same rules.

For many years the set up at the WPC was that a country could send at most 4 people to the competition to compete.  If 4 members were sent, they formed an official team for the team rankings, and if not, there was an opportunity to mingle with other short-staffed countries to form unofficial UN teams which didn't appear in the official rankings..  Everyone who participated individually was ranked!

At the WSC the situation was a slightly different, to reflect the popularity of Sudoku and the WSC.  Teams used to be of size 3, and a maximum of 6 people per country could be sent to compete.  Again, where the numbers didn't add up, unofficial UN teams could be formed.  Again, everyone who turned up ended up with an official ranking.

The one complication came with countries who had both an A and a B team.  What if the B team's ranking in the team competition was higher than the A team's ranking?  Well, then the B team's ranking was used to display the final result for that country.  This happened to the UK, for example, in 2009.  A completely natural and sensible compromise, you'd have thought.

In 2011 things changed when the WPC and WSC merged and players from one championship were able to have a go at the other.  A new set of rules was brought in, and in my opinion this was a change for the worse.  Given the status quo is not entirely clear, let me spell it out to you.
Perhaps some of you, like me, are a little bemused by all this talk of unofficial and official rankings.  Aren't all these rules overcomplicating things a little bit?  Should alarm bells be ringing?

The best 10 solvers at the 2011 WPC were, objectively:
Is it not very strange then, that Michael Ley was not allowed to be one of the 10 finalists, and instead my compatriot Neil Zussman was - even though Neil's points total of 3864 was nearly 200 down on Michael's?

The reason was that Michael Ley was on the German B team.  And so his results were null and void.  They didn't count.  He may as well have not bothered.  Of course this situation was known to everyone beforehand, and Michael will be the first to admit that participation is equally as important at the result.  Even so, I'd argue it makes a mockery of the notion of a world championships if some of the best solvers in the world are not getting a fair chance at the title.

We were fortunate enough not to have a situation like this in 2012, but let's examine the situation in 2013.  Objectively, the best 10 solvers at the WPC were:
And who were the 10 finalists?  Well, no sign of Ken Endo, who was on the Japanese B team, and so his results were null and void.  No sign either of Ko Okamoto, who wasn't even on the Japanese B team, but was instead competing as a guest, and a member of a UN team.  He had an individual score in the results because individual results are counted towards the final team score.  But to add an extra element of farce, he wasn't even give a ranking!  Qiu Yanzhe was listed as 6th on the official list, and 7th on the "all" (hahahaha) list - despite the fact his was objectively the 8th best score.  Count them!

I think everyone can agree that these situations are immensely undesirable.  I'd go so far as to say they were embarrassing.  So what is there to be done?

Well, some might say nothing is broken at all.  In 2011 Germany were at fault for not selecting the best A team, and ditto Japan in 2013.  Everyone knew the rules.

Why not operate like the WSC used to?  That is to say:
Given that proposals to stop spitting in the face of anyone competing as a B team member and actually give them a ranking have been continually voted down at WPF general assemblies, perhaps my opinion is a minority opinion.

But I also believe that if this really is the way the WPF thinks, then they should stay consistent to their principles and explicitly limit participation to 4 people per country, and end the farces that we've seen in 2011 and 2013.

I believe my proposal is better.  And I'd love to know if people can tell me where I am wrong.
By Tom Collyer at 15:20 38 comments: