Well, as we bring 2010 to end, dearest reader, I must confess that this post has been written in advance, as I am currently having almost literally a whale of a time in Berlin. I’m afraid that means that there isn’t going to be a puzzle here until sometime next week – I have had myself a nice and lazy and indulgent Christmas break at home with the family.

However I hope that everyone has enjoyed my offerings this year, be it my rather manic 7 puzzles in 7 days which heralded me branching out to writing a few new puzzle types; or perhaps my long Championship write-ups from Philadelphia in April and London in September; or the start of my “career” as a competition writer with both the (moderately disastrous) LMI Nikoli Selection and the UKPA Sudoku Championship (well done again Warren!); or perhaps one of the numerous twisted symmetry Masyu I always seem to resort to when I’ve forgotten to write a puzzle for a particular week.

Anyhow, I hope everyone has had a good 2010, and here’s to the promise of 2011 – not least the puzzle that’ll be edited in here later!

EDIT: Here as promised is the puzzle. I will probably be revising Heyawake fairly soon, in response to an email I had from Otto Janko before Christmas – but for now, here is a nice small puzzle which should prove a bit of a tough nut to crack. Enjoy! 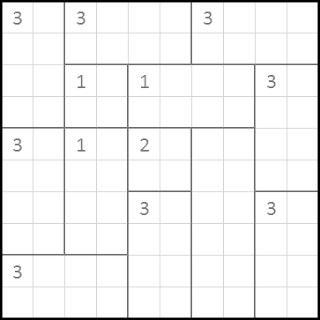 I nearly forgot to put out a post – just like the good old days – but luckily enough there was something lurking at the bottom of the pile in my “unpublished” folder.

And with good reason too.

Christmas is an occasion the newspapers like to fill with bumper sized crosswords, and extra hard sudoku puzzles, and other puzzling novelties given that we have all this spare time on our hands. The thing with this puzzle is it’s much harder than that. Enjoy! 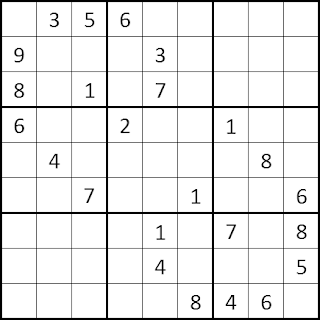 Busy busy busy this week, so here’s a Masyu with relatively few clues – 15. To spark a debate, has anyone seen less? I can’t recall one off the top of my head this second as I provocatively write this statement…
Anyhow, enjoy! 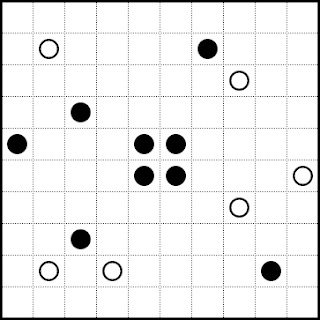 I’m afraid I’ve been in Galway all week, sans laptop, and so you’ll have to wait until at least Monday before I edit something in over this!

So I have a little folder of odds and ends on my laptop entitled “unpublished”. In it, I found this rather pleasing looking sudoku puzzle. I haven’t had a look at it for a long while, so I can’t totally vouch for it being an easy, but it seems unlikely that I’ve stitched together a decently challenging sudoku that looks this good. Enjoy! 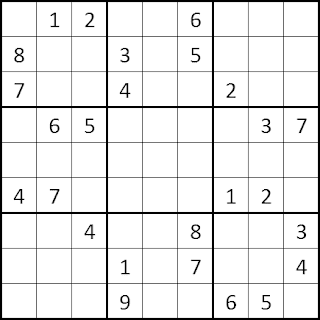 First up – I’ll post this week’s puzzle – which is a fairly gentle nurikabe. It’s been a while since I had a nice and easy puzzle so I hope this pleases the more casual of my readers! 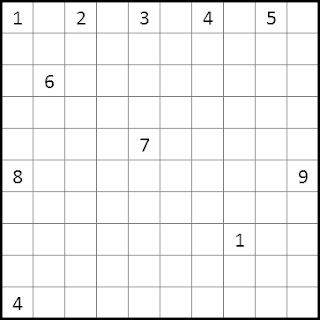 
But let’s move on. I want to discuss the numberlink puzzles from last week, and in particular make a few remarks about uniqueness of puzzle. As regular readers know, my approach to numberlink uniqueness is to find a solution to given array of clues and then try and establish its rigidity.
The first puzzle I’ll discuss is #106. Here is the solution: 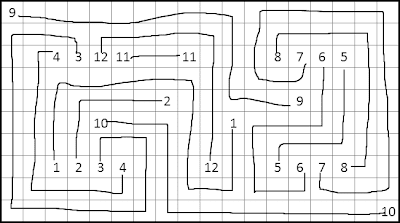 It is a quick check with this puzzle to see that there is no such unnecessary wrapping. I haven’t rigorously proved to myself that this means the solution must be rigid, but I’d be very surprised if this wasn’t the case (with a few highly symmetric exceptions). Ok, fine, I haven’t got anything more to add to this at the moment so let’s move on.

Here’s what I had in mind (in black) with the original #105 I posted, together with (in red) where things go wrong: 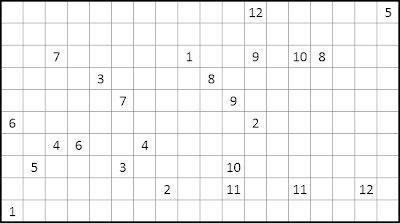 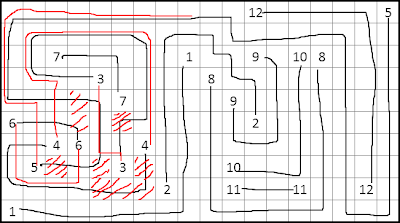 So there are a couple of points to consider here. Firstly, look at that pair of 2’s, and the amount of what I’ve just defined as “unnecessary wrapping” it does! There’s something more than meets the eye going on here. The initial idea for the break-in to this puzzle was with the 1’s and the 5’s. A little spatial reasoning quickly suggests that one of the solution lines must go via the top-left of the grid, and the other along the bottom edge – so that the cluster of 3/4/6/7 is avoided.

A little more inspection reveals that the 1’s would be causing all sorts of difficulty with the 6’s if it went out top left, so the 5 goes round the top left. It was here that I made the mistake. I thought there was only one way for the 5 to get past the 4 and the 6, but completely overlooked the obvious route as marked in red. This was how I fixed the puzzle – by closing up the gap (and adding a 13th pair of clues): 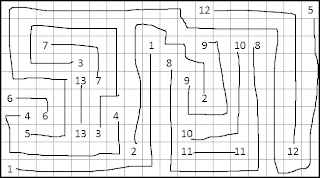 This alteration made the puzzle a little easier than intended. The 3/4/6/7/13 are now essentially forced. A by product of this is that it forces the 2 to squeeze the “wrong” side of the 1. This is a bit of “logic” that only came in to play later in the original – but essentially reveals the origin of the “unnecessary wrapping” of the 2. The given clues in the puzzle are acting as blocks to the paths, which must channel in between them, with the obvious restriction that there are only so many paths that can fit into a small space. So once the 2 goes round the back of the 1, it also has to go round the back of the 8 and the 9.

The rest of the puzzle is then fairly trivial.

What I find interesting with this puzzle is that actually it wasn’t too hard to find a sketch framework to logically prove the solution is the only one. Ok, I’ll hold my hands up with the stupid oversight with the 5’s, but the fix was essentially minimal and still retains most of the features I wanted from the original puzzle.

Going back to #106, I think this one is much harder to make a start to the puzzle and go step by step in trying to establish forced paths. Instead, it isn’t too tricky to use a little metalogic (i.e. assuming uniqueness of the solution) to get the solution out – and then to do a quick check to see that this solution turns out to be rigid. Which is a completely different approach to things!

Anyhow, for all those numberlink fans out there, I hope this has provided a little food for thought.
By Tom Collyer at 03:28 No comments: