So having got to bed sometime after midnight on the Friday, me and Mike (with whom I was sharing a room) roused ourselves at 7am. I am not what you would call a morning person – unless you extend that to (small hours of the) morning person – and so I was the last to join the rest of the UK team for breakfast at the hotel restaurant. My previous breakfasts in this part of world have generally involved sausages, bread and mustard (and occasionally beer) and the restaurant did not let me down here. Indeed it thoroughly improved upon the matter by providing baked beans, a rare treat outside of the UK! It was David I think that produced an interesting titbit of trivia that marmalade was going out of fashion with Britain’s youngsters. It is apparently our patriotic duty to keep this flagging industry afloat. I can only confess to being highly disappointed upon discovering there was none of Britain’s finest to ironically spread across the rather small croissants provided.

So onto the competition. Saturday’s puzzling was to commence at 9am and wouldn’t be finished until midnight – albeit with a few breaks around mealtimes – but which nevertheless represented a gruelling schedule.

So as things turned out in the general rankings, this was a fairly highly weighted round and if you wanted a top place you really needed to ace this round. Its format was solve as many puzzles as possible in two hours. There was a twist to this however – most of the variant sudoku towards the beginning of the round were linked to some classic sudoku puzzles towards the end of it, by virtue of a common square. Thus whilst a 4×4 “sudoku” with only a 2 and 4 given has rather more than one solution, with the information its twin puzzle provided narrowed things down a bit.

Actually, I believe this to be a really nice idea for a sudoku championship, however the execution was flawed in two ways: firstly it was implied by the instructions that the flow of information would be variant -> classic. This was not the case, and in some cases things even went both ways. Okay, so far, so mildly diabolically clever. The second flaw was that then a lot of the classic puzzles were computer generated in such a way that there wasn’t a pleasing and logically rewarding solution path so you were better off guessing to be quicker on most of them. The trouble here is that if you break one, you’ve probably then broken both puzzles which can lead to some pretty hefty write-offs, as Jason was to find out. As irony would have it, the two puzzles I broke on this round I hadn’t guessed on. C’est la vie.

I’ve paired up these two half hour rounds together, because already this Saturday report is getting a bit long. On the other hand it’ll give you a feeling as to just how gruelling a day it was! Round B involved three symbology puzzles – basically classic sudoku but instead with Mayan, Roman and LED digits respectively. The Roman and LED puzzles had a bit of interest in that given clues were not necessarily complete – so V might indicate anything from 4-8. My strategy here however was to transpose everything into familiar arabic digits and after solving rewrite in funny digits. This was fairly successful as two out of three successful solves meant I was to go through to an extra playoff round, which in turn might give me a go at the little final. What was the point of all this? God only knows.

Round C was a collection of four puzzles fitted together to look like a snowman. Why? God only knows.

This was called “world record”. This is stupid. You cannot possibly hope to have anything like a fair world record for sudoku. There is no way to standardise a puzzle for comparison, which indeed is something of the appeal of the puzzle! Anyhow, what is more stupid is to then provide the hardest puzzle to ever appear in competition for this one off. Scanraid rated a typical fiendish puzzle from The Times at around 125, and a superfiendish at 225. This insane puzzle from last year in Goa 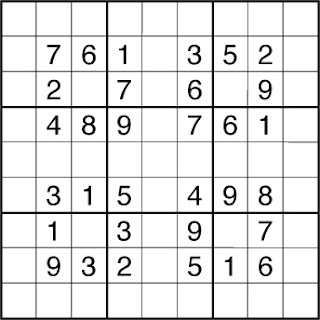 described by Thomas Snyder as being turned up to 11 – in tribute to This Is Spinal Tap – could only manage a paltry 378. 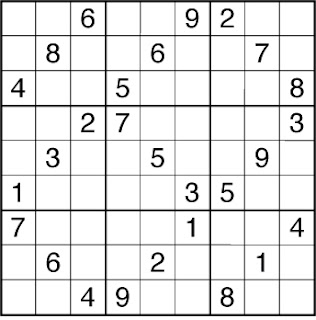 This scored 641. This is THE sudoku puzzle the devil would set you to solve to save your soul. Only if you placed a wrong digit, made by say a guess, Cerberus would be there ready to take three large bites from your arse cheeks. I have looked up what a “double-finned swordfish” is and one day I hope to solve this logically. In less than a week.

A Belgian named Vincent Bertrand made a very lucky guess early on and solved it in 3 minutes and 6 seconds. That time is just about as insane as the difficulty of the puzzle itself. As it turned out, Vincent is actually a top top solver anyhow, and the only possible thing you can take away from him in that a room of 130+ people guessing, one person was likely to get it quickly.

And having had our first introduction to the farcical puzzles, we adjourned for lunch. This entry has gotten a bit long so I’ll save the afternoon and evening for the next one. Things can only get weirder!
By Tom Collyer at 14:56