The good old non consecutive constraint provides at once both great delight and pain for the aspiring puzzle designer.  Perhaps what I originally had in mind for this puzzle will become slightly more apparent when you have solved this.  With the aid of a program, I started with my gimmick and a few randomly specified clues and I found a valid solution grid.  Whilst trying to maintain the gimmick and carefully manipulating the givens to yield a bona fide puzzle I found I either ended up with something that was either too hard (by which I mean tediously so) or else too easy.  So the gimmick went, I got a little creative and eventually Dearest Reader I arrived at something which was to my satisfaction.

In lieu of last week's puzzle I have also decided to give my difficulty ratings a little rethink.  From now on "easy" is going to be applied to puzzles which can be solved with standard and well-known steps.  These will generally take experienced solvers no more than 5 minutes to solve.  "Medium" will be applied to puzzles with perhaps a novel step or two or else a couple of bottleneck steps which definitely need to be resolved before further progress can be made with the puzzle.  There will be some variability in the times here, with solving times encroaching both below into easy territory and above into hard, reflecting the increased variance in solving inevitably introduced by novelty.  "Hard" will be largely be reserved for innovative puzzles requiring involved non-standard steps or with a solving process with several bottleneck steps.  These will generally take even experienced solvers (at least) a good 10 minutes to solve.

Please note this will mean a great deal of formerly "medium" puzzles will be downgraded to "easy,"  and ditto many "hard" puzzles will become medium.  Although there will of course be some puzzles in both categories that survive the cut!

I'll possibly retrospectively go back and edit the difficulties in the archive of previous entries at some point.  In more generality it's something I need to start doing at some point so that the image files are hosted on blogger rather than at warwick.  I might even start tagging them! 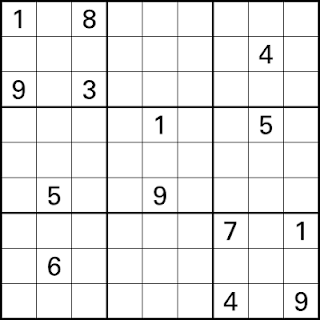