So by now more or less everyone has heard of Cracking The Cryptic.  Lots of the puzzles featured these days are what I'd describe as curiosities, sometimes with strange mish-mashes of constraints paired together to produce interesting solving gimmicks, sometimes with constraints and solving mechanics that go way beyond anything that resembles classic sudoku.  In any case they represent sudoku variations probably wouldn't retain much in the way of interest once the initial novelty had worn off.  Not that it isn't great to see so many different people I'd never heard of before producing these interesting novelties of course!
One idea that does seem to have a few more legs appeared in a more fiendish form that presented below.  Ahaupt's idea is for you to construct an irregular grid from a regionless start to the puzzle, using clues which give the sums of numbers to be placed in each of the cells the clue sees in both the horizontal and vertical directions up to the border of a marked region, including the cell the clue is contained in.
I think the idea is perfectly nice if you are given the courtesy of the irregular grid to start off with.  You end up with something that is related to Jigsaw Killer, where you combine Irregular Sudoku with Killer Sudoku, but something that I think is a little bit nicer, and with enough differences to warrant calling it a separate Sudoku variation.  I'll call it Signpost Sums Sudoku.
The trade-off with Signpost Sums is that you no longer have the cages represented visually, which is a bit of an inconvenience, but you do have the comfort that you don't have to scan across different regions when looking at the sums, and you get the possibility of having some of the now implied cages to be overlapping.  As each of the sums are entirely contained within one region, it means that you still get to keep the no-repeats condition with the sums.
I've tried a puzzle using a normal 3x3 box layout, and whilst possible I don't think it was all that enjoyable.  Instead I've gone with a couple of irregular grids, one a warm-up, and one towards the harder end of difficulty you might see at a well-balance competition.  I'm kind of hoping I've taken enough care with the clues and testing this myself for these to have come out uniquely, but if not I'm sure one of my dearest readers will let me know soon enough.
Enjoy! 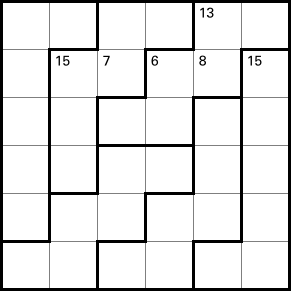 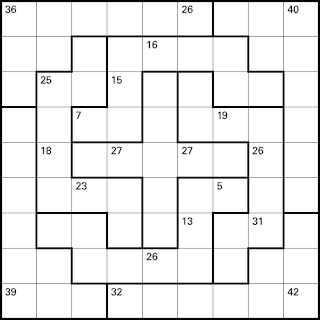