I had in mind to write a few X-Sums and Killer Sudoku over the next few days, which led me to digging around in my notebook and spotting a puzzle or two that I don't think I'd published anywhere.
Actually I think this one was in the same batch as a similar post I made last year.  I think I originally wrote that batch for someone I care about very deeply and who particularly enjoys X-Sums Sudoku.  Last year’s  post was the better puzzle I think, but I certainly enjoyed myself re-solving this one just now and it certainly seemed too good not to share.
Obviously 2020 hasn't been the best year for many people, but 2019 was also a pretty miserable year for me, and off the back of that I had a period in February this year, before the pandemic set in where I was feeling particularly hurt, betrayed, ignored, unloved, unappreciated and unencouraged.  Maybe that wasn't (and isn't) exactly true, but it certainly felt real enough at the time and was a really overwhelming wave of sadness.  One of the nicer things to happen after that was receiving a message from Simon Anthony, who offered to do a video on one of my puzzles.  Mark, who is a good friend, was very generous with his comments in the ensuing video, which features the puzzle from that same post.
The whole thing was a kind gesture, as perhaps even back then, pre-pandemic, it was clear that the puzzles that I like to write and the puzzles I enjoy are generally in a very different direction from the puzzles that they like to feature on the channel.  With that in mind I suppose that I'm not surprised that's pretty much the last I heard from them, despite our previous history.  As I've said before, that's not a complaint on my part, it's fair enough, they've moved on and have their own audiences to worry about.  I am certainly appreciative of the gesture when I was at a really low point.
It was certainly in marked contrast from any support from the WPF, for whom I was half killing myself to write a report trying to provide clarity in trying to classifying sudoku variations.  Looking back, it was a good report and something that I suppose I'm proud of - But equally, it turns out that that was something the WPF didn't take seriously (either in trying to produce it - or then subsequently using when finished), and that the wider community was more or less entirely indifferent to, and so it's hard to conclude that all that effort wasn't entirely in vain.
I felt a similar overwhelming wave of sadness again over the Christmas period - here in London Christmas has more or less been cancelled and I've had to try and cope by myself as best I can.  If I'm being completely honest there have been times where I have not coped at all.  Part of my sadness is that to me, the puzzling community feels as distant now as it ever has - previously it has been somewhere where I could draw a sense of appreciation, strength and support - and I just don't get any of that any more.  I should say that there's no real point or criticism I'm trying to make here, dearest reader, this is just how life goes and sometimes things just move on.  It's more a case of making some observations and trying to process and untangle some knotty threads that have been bringing me down for what is probably a period of over 2 years now.
Better out than in I suppose - I hope my dearest readers have had a happier year than I have.  Enjoy! 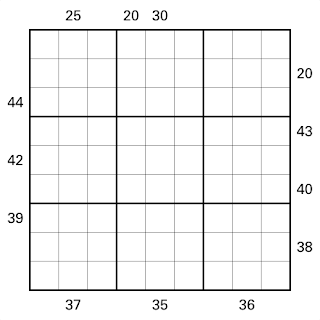