Portrait of a flying fish 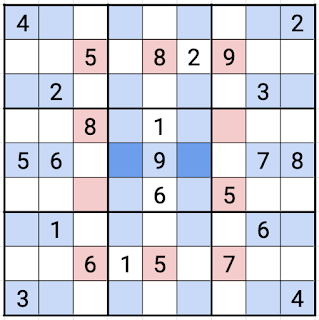 If you found that picture interesting, then perhaps these are some interesting words.
UPDATE: as far as I can tell, there is no need to add Box 5 to the equation here - this makes the intersections slightly simpler (no need for double-weights any more) - but it does make it harder to identify where you are supposed to be looking.
If you didn't find that interesting, then I'll leave you with some whimsical musings.  I always thought that an obscure and difficult sudoku solving technique going by the name Exocet was named for a powerful missile that could bust open the hardest of puzzles.  Cela a plus de sens en français.
By Tom Collyer at 23:41