This week comes with a bit of a special theme. The number 10. It’s also very special in that I have managed to get this out and published on a Friday. Wow!

As regular readers may or may not know, last April I participated in the 4th World Sudoku Championships, hosted in a dusty provincial Slovakian town called Zilina. Much was made of the (lack of) quality of many of the puzzles – but one of the most enjoyable puzzles was a variant that appeared in the semi final: 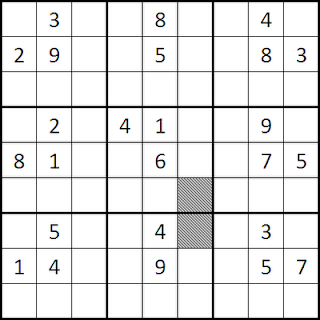 The idea was simple – take a classic sudoku, and mark exactly where an adjacent pair of digits summed to 10. So if a 3 and a 7 were next to each other, a cage was drawn round and marked 10. The twist with this is the contrapositive inference – that is if no cage exists round a pair of adjacent cells, then the numbers inside cannot sum to 10! The puzzle itself had only one such pair of numbers marked – which made me wonder if actually you could go one better and perfect the puzzle.

Well, it turns out you can. After a lot of painstaking work to first even find a valid solution grid, I then wrestled with the task of making a decent puzzle – with my given visual theme. The result isn’t particularly challenging – though not totally trivial.

I do also have a couple of very hard puzzles too. They turned out to be hard almost by chance – they certainly aren’t a particularly pleasant solve in my opinion and so I haven’t bothered publishing them. Anyhow – without further ado, here’s the preamble: place the digits 1-9 in each row column and marked 3×3 box. Digits in adjacent cells may not sum to 10. 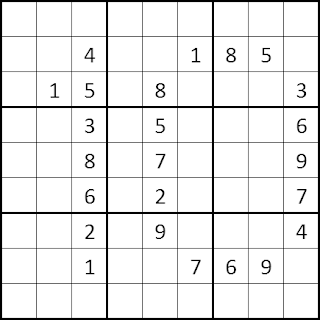 All puzzles © Tom Collyer 2009. Well, obviously excepting the world championship puzzle above. I have no idea who to credit that to – and whilst used without permission, I’d like to think that demonstrating it would come under fair use. Anyhow, please respect the rights of the author.
By Tom Collyer at 12:55