This week’s entry in my Friday Puzzles series gets its own proper Radiohead-song-title because I’ve managed to go off on one and explored a few deeper avenues than I would have normally done.


"I liked it! The start was simple enough, and then you made some medium-level deductions to get some big sets of blocks, etc. I’d say the grand finale (I felt pretty sure there were two solutions or more…no, I was wrong) isn’t as bad as you claim. It probably shouldn’t be someone’s first Heyawake, but it’s not the pinnacle of difficulty. It’s a harder medium, how’s that for a/n non-/answer?"

On the other hand, I’ve been having a little think about the nature of difficulty and the nature elegance within a puzzle. I think it’s fair to say that by no means are the two are correlated – see this entry for two examples of sudoku too hard to be elegant – well elegant for the pen and pencil solver anyway. To labour the point a little bit more, here is an example of a puzzle which is INSANELY difficult. If you solve it, the only logical deduction is that you used a computer: 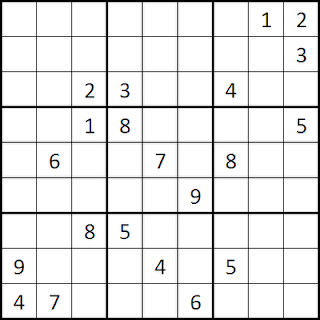 I found that puzzle after routing around a forum discussion of the hardest sudoku puzzles, it has been given the slightly affectionate nickname “Platinum Blonde”. These people have gone way beyond the solving capabilities of any human solver. So whilst I may have claimed previously that the 2009 Zilina world record puzzle was as hard as it gets and that it’d be the puzzle Beelzebub himself would set you to save your soul – actually the behemoths these people whip up for each other you are doing extremely well to solve even if you use lots of trial and error. I recommend not even starting to attempt.

Now, on the other hand, some easy puzzles can be extremely elegant. Not necessarily in the techniques required to solve them in isolation, but how the techniques come together to form a complete and satisfying solve. What this could mean for example, is a puzzle that has a definite starting point, which leads directly to another deduction and so on – inducing a “continuous flow” to the solving experience. It may be a repetition of a particular solving technique, or it may be a particular visual pattern that emerges as you solve the puzzle. I guess much like any art form, there isn’t really a satisfying way to define what makes a beautiful puzzle – but even a complete novice can spot it and enjoy it when they see it.

Anyhow, that’s an awful lot to aspire to. I’m not quite sure how much of that I’ve managed to achieve with this Heyawake (if any at all), but I’m running out of time to fiddle with it today… 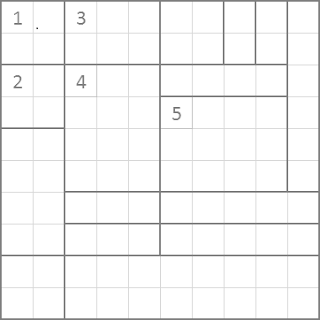