Apologies for the delay, I’m sure you all know what things are like as Christmas approaches.

This week, I’ve decided to write a sudoku. After much experimentation with a certain pattern, I’ve grudgingly had to modify things a little in order to avoid either an impossibly (well not quite impossible, by definition, but you know what I mean) difficult puzzle, or a puzzle with multiple solutions. Still, after a quick check with scanraid (which actually appears to have renamed itself “SudokuWiki” which IMO is more than a little pretentious and misleading in its current form) to get an indication of the difficulty, it would appear to be on par with a Times fiendish puzzle and so I get the satisfaction of writing a puzzle which ought not be solvable in quite so much of a hurry as my previous efforts.

Another point of discussion is that as sudoku puzzles increase in difficulty, the more guessing strategies become useful if you want to go for the quickest times. This is where hand-made puzzles can come in – the cunning trick to crack the puzzle ought to be more obvious to the solver than a standard puzzle out of the generator. This is purely because the human eye is better equipped to pick up subtle clues as suggested by the aesthetics of the puzzle because said aesthetics are a big deal for the author of sudoku puzzles by hand. I’ve left that statement intentionally a little vague, because I hope dearest reader, that you’ll see exactly what I mean whilst solving. Enjoy! 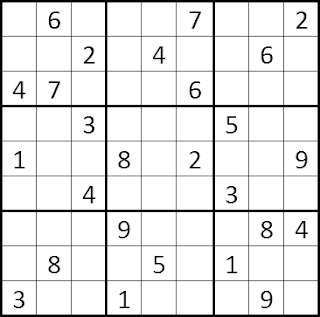