Wait.
I've seen this.
I stand here, right here, and I'm supposed to say something.
I say, "Every grid with an intersection of partitions deduction has a multi sector locked set, Tom"
A little while back I published a difficult puzzle as a kind of tribute to what I consider one of the greatest Sudoku puzzles of all time.  This puzzle was first published in 2008 in the Botsu Baku section of what was nikoli.com.  Sadly, nikoli.com and its many, many gems are no longer with us, but I do have a screenshot or two in my private records so that there is at least some archive of these puzzles. 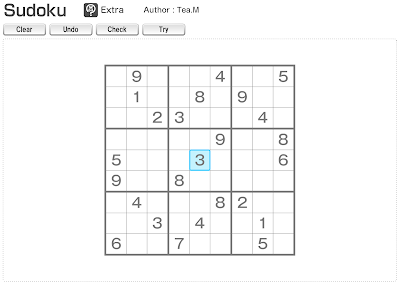 To make initial progress with this puzzle, you can place a 3 in R9C6 and 9's in R3C5 and R5C8. And then you grind to a halt.
I suppose it should come as no surprise that this is a puzzle that Cracking the Cryptic has picked up on previously, as wonderfully meticulous as they are.  The position after these three placed digits seems to be where they've picked up on this.  [As an aside, I can't say why they picked up on this non-symmetrical version of the puzzle, to which there isn't the usual attribution - but I'd be interested to hear more about that].  Simon goes on to describe the technique required as a so-called Schroedinger's cell.
R4C1 is identified as the Schroedinger's cell, which seems the natural choice as the ensuing what-if analysis makes use of the fact that the only candidates in R9C5 are 1 and 2.  This mirrors the original explanation given by nikoli in the corresponding solution replay back in 2008, as it happens.  My interpretation of the logic is something like:
The puzzle then continues by noting that the only place for a 4 in Column 1 is at R2C1.
One observation with my interpretation is that we didn't use the fact that the only candidates for R9C5 were 1 and 2.  If R9C5 was neither 1 nor 2, then we'd have to conclude that R4C1 was simultaneously a 1 and 2.  Which, despite all this Schroedinger adjectival being thrown about, is still a contradiction, and so we also deduce that the only candidates for R9C5 are 1 and 2 anyway.
So why not observe that R9C5 is also a Schroedinger's cell?  The logic is something like:
The symmetry is beautiful!  But either way there is still something of the if-this-then-that, or even trial-and-error about this deduction.  Maybe we could make this slightly more satisfying: 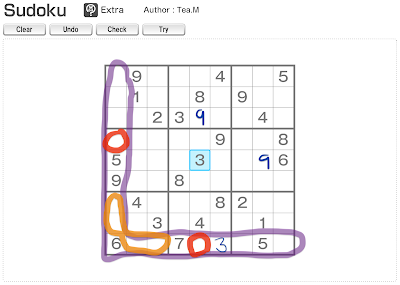 Let's consider Row 9 and Column 1 simultaneously, which I've circled purple.  Within these 17 cells, we need to place two 1's and two 2's (noting that we already have a 6 placed at the intersection).
Now let's think about where we can possibly place this set of four digits within the confines of the purple cells?
Therefore, we can conclude that the "at mosts" are also "at leasts", and subsequently that the only two candidates in each red circled cell have to be 1 or 2.  If either cell was anything other than a 1 or a 2, then we could not fill up Row 9 and Column 1 with their full complements of 1s and 2s.  Put another way, this little trick that unlocks a masterpiece from 2008, is nothing other than an example of MSLS, as first described in 2012.  Which I think is rather extraordinary!
So dearest reader, what are we to make of all of this?  All the recent discussion regarding Phistomefel's theorem, its further generalisation as Fred's intersection theory, its further generalisation as Trevor Tao's "9D Wonkyfish" - as well as Sam Cappelman Lynes' exposition of this in the language of SK Loops and MSLS has certainly got me thinking.
Sam himself said that there is no formal definition of MSLS that is agreed upon, so I thought (at the risk of probably reinventing the wheel) it might be worth sticking my own neck out, and having a fumble in the dark with my own interpretation.
I see MSLS as being a generalisation of hidden pairs/triples etc.  The idea being that we are trying to find areas of the grid where we have:
To highlight the generalisation, suppose you have a row where you are looking to place the digits 1,2,3 - and you know that the 1 can only go in C4,9, the 2 can only go in C2,4,9 and the 3 can only go in C2,4.  Then you have a set of three digits (1,2,3), and only three cells in the row in which you can collectively place them.  The hidden triple deduction then lets you say that the possible candidates in C2,4,9 can only be 1,2,3 - and that any other digit can be eliminated as a possibility.
This is easy enough to see in the confines of a single Row (or Column, or 3x3 Box come to think of it) where we don't have the complication of repeated digits.  After all a hidden triple, whilst sometimes very difficult to see when solving by hand, is nevertheless viewed as an elementary sudoku solving technique.  What I find fascinating is that Phistomefel, Fred and Trevor have helped teach us that there are deeper structures within Sudoku, inherited from Latin squares, that link together multiple instances of different rows and columns, and to which we can apply the same kind of thinking.  These structures go beyond the naive understanding that we are simply looking to place each digit from 1-9 both at least once in each Row, Column and 3x3 Box in isolation, and indeed at most once in each Row, Column and 3x3 Box in isolation.
The examples from the Tatooine puzzles (we discuss sunset here), as well as Sam's puzzle (as discussed in Reloaded) involve rather large sets of "hidden" digits with multiplicity that somehow need to be squeezed rather tightly into similarly sized sets of cells within the grid, and both the digits and the cells can be hard to see on the face of it.  The main point of all the recent progress we have made, dearest reader, is to help better visualise when we might be in a situation to uncover one of these hidden multi-pairs, multi-triples or multi-quads.
I don't think we will ever need anything bigger than quads, in much the same that we never really any thing beyond the 4-way x-wing, a.k.a. "Jellyfish".  In fact, I think the correct way of thinking about all of this is that x-wings, swordfish and jellyfish are basically hidden multi-singles.
I'll begin to conclude.  Hopefully with Revolutions, I have been able to demonstrate that hidden multi-sets don't always have to be big and intimidating beasts.  Once I revisited the nikoli puzzle with the MSLS framework in mind, I was surprised by the simplicity of the deduction - potentially even easier than x-wings and swordfish, and certainly no more difficult.
Equally interesting is that within this simplicity lies something else that I haven't been able to grasp in terms of intersection theory alone - and I think it's because now we're mixing in 3x3 boxes alongside rows and columns.  As I've hinted previously, I do have other ideas about how this might equivalently end up, but on that note, dearest reader, I'm going to leave things there and simply say I much prefer Sudoku to Column Dance.
By Tom Collyer at 23:15