Another week, another Masyu puzzle. As promised from last week, this features a novel new trick which you might have missed last week as it wasn’t required in the solve. So whilst I haven’t really had the time to do a juno with it this time round, you will at least have to spot it. Actually I claim it’s a novel new trick, but that’s only to the best of my knowledge.

Additionally this week, I’ve tried to give this total twisted symmetry, but it manages to break down in a couple of places. It turns out that a nikoli.com author by the name of cubic function has simultaneously been incorporating twisted symmetry into his puzzles – including in much larger sizes than mine for a while now too. His designs have perhaps been less striking than mine, and I’ve only picked up on it after solving a second time. 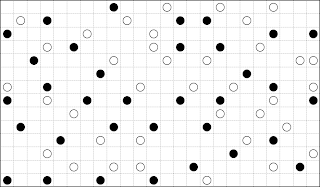 Whilst I’m on my soap-box, actually, I read this week that the “world record” for sudoku speed solving has been broken. Now the world record criteria – here denoted as STD-27 – are somewhat arbitrary, presumably to ensure a hard puzzle, but I was the first person to question this, and made a puzzle satisfying world record criteria over a year ago, solvable in the order of 2 minutes. I believe a certain Mr Snyder held that unofficial record. Anyhow, the Czechs have made an even easier puzzle than mine, and the record was broken a total of three times at this event, ultimately by Jakub Ondrousek.
By Tom Collyer at 01:00