So this week time has somewhat ambushed me and I don’t really have anything brilliant to share. Given that I’m going to be busy at The Times national sudoku championship over the weekend, I can’t really cop out and offer to post something up later either. Do expect another hideously long and boring report coming soon. Haha…

So what I’m left with is basically the beginnings of an idea that will hopefully get off the ground after the official UK Puzzle Association’s 1st Sudoku Championship. No harm in a shameless plug, even though there a few things left to be sorted out there. Anyhow, back to the idea. What we have is a Standard Sudoku, only I’m telling you that exactly three (3) of the given clues are wrong. You can probably tell this is very much an initial concept puzzle, but it’s the best I’ve got this week – sorry!

Also (with a seamless change away from personal failings), last week I also forgot to plug the latest issue of Dr. Gareth Moore’s Sudoku Xtra. The latest issue (#10) features a wide selection of good puzzles from Gareth + more – including a Sudoku Islands puzzle from yours truly. Definitely recommended! 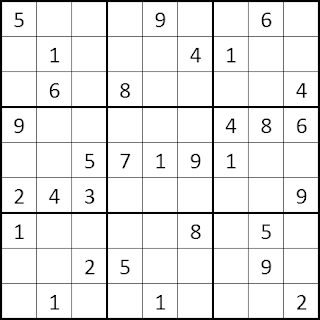