One of the comments about some of my Friday Puzzles that I hear from seasoned puzzlers is that they are a touch on the easy side. I have said before part of my aim is to put out puzzles that are primarily friendly to a more general audience. This softly softly approach has the advantage of letting me put out more polished puzzles – the thinking being that as a puzzle writer the time to master quick and easy techniques onto my puzzles is quicker than trying to do a juno.

On the other hand, it has been tempting to flex my muscles a bit, and there have been a couple of puzzles I have released together with a comment along the lines of “expect a similar puzzle in a bigger and better format later”; only for that puzzle never to materialise.

Well, this changes this week – regular readers will no doubt spot the similarities with a previously released puzzle. Here is a nikoli large sized masyu puzzle. Apart from the end being a bit fiddly, I think this is as good a puzzle as I’ve ever written, and I hope you – most dearest of readers – think the same. Enjoy! 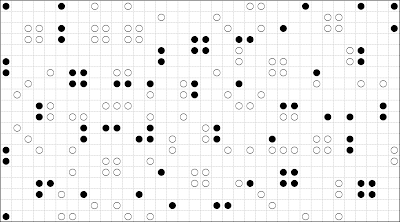